The Proper Role of Policy in Private Law Adjudication

The re-emergence in recent years of interest in the private law in and of itself, rather than as an instrument of extrinsic, regulatory goals, has called into focus the appropriateness of ‘policy-based’ reasoning in private law adjudication and rule formulation. While many have become accustomed to the idea that the courts both can and must resolve disputes in terms of community welfare or socio-economic considerations, more recent formalist, corrective justice-based accounts of the private law simply have no room for any policy or instrumental considerations; the private law is concerned only with the balance of justice between the parties to the dispute. To a large extent, the opposing views rest on deeper philosophical premises about the proper role of law and of the courts in society and have arisen in opposition to each other. The opposing camps thus tend to talk past one another in restating their respective views. In seeking to contribute to, and hopefully advance, this debate, we defend the thesis that direct recourse to considerations of the social, moral, or economic impact on society of a particular rule or ruling, as distinct from the policy of a legal rule or policy as the deeper values of society, is inconsistent with the fundamental characteristics and methodology of the private law and that this is not contradicted by the necessary role of final appellate courts in reformulating the law or by the inherently political and instrumental underpinnings of statutory private law.

The Boundary between 'Not-for-Profits' and Government

This chapter attempts to trace the development of a concept of voluntariness. This cannot be done by reference to a category of 'not-for-profit', for that category is a recent invention. Instead, the history of voluntariness is to be found in the history of two other concepts which might be seen to be distinguishable from government - charity and civil society. These concepts are neither wholly distinct from, nor coterminous with, 'not-for-profit'. Once the histories of these concepts have been considered, the normative determinacy of the concept of voluntariness will be considered in the light of some contemporary intersections of government and not-for-profit activity. 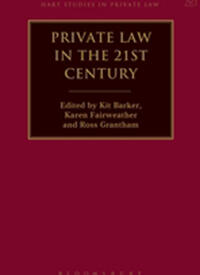 This paper evaluates the provisions concerning constructive trusteeship in Trusts Act 1994 (Marshall Islands) and makes more general observations about the roles of constructive trusts in litigation involving trustees' breaches of duty, the roles of statute law and the risk inherent in attempts to express complex and multi-faceted private law concepts in statutory formulae.

Coherence in the Age of Statutes

The High Court of Australia, in pursuing coherence between common law and statute law, has limited itself to ensuring that the rules of common law and statute law should be free of contradiction. The Court does not appear to have embraced the idea, which lies at the core of some major theories of private law, that a set of rules is coherent only if the set can be explained as the outworking of a single principle. Applying that idea to the relationship between common law and statute law is confronted by some serious challenges. In the past, coherence as non-contradiction (combined with the idea of parliamentary supremacy) has worked well as a means of reconciling common law with statute law, but the proliferation of legislation in recent years and the character of much modern legislation has drawn attention to the limitations of such an approach to the question. A more exacting approach to coherence of common law and statute law, on the other hand, would require the revision of some widely-held assumptions about the nature of law, such as the core assumption of legal positivism that the ultimate criterion of the authority of the law is its pronouncement by an authoritative institution.