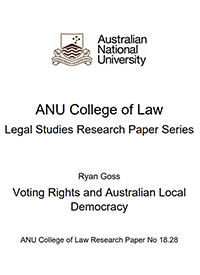 ABSTRACT: In five of Australia’s six States, legislation governing the franchise at local government elections allows for voting rights based partly on property ownership or occupation, for votes for corporations, and for various forms of plural voting. There is no existing comprehensive nationwide catalogue and analysis of the legislation that underpins this phenomenon. This article fills the gap in the literature by providing that analysis. Part I provides a concise overview of the historical context in Britain and in Australia. Part II is the central contribution of the article, describing and analyzing the legislation across the six Australian States. Part II demonstrates the idiosyncratic complexity of local government franchises within and across the States. While this article’s primary goal is to critique the legislation as it stands, Part III concisely makes the case for reform of voting rights at local government elections, suggesting that the status quo raises concerns about democratic inequality. 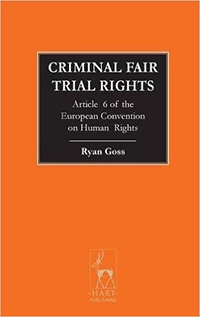 Article 6 fair trial rights under the European Convention on Human Rights are the most heavily-litigated Convention rights before the Strasbourg Court, generating a large and complex body of case law. This book provides an innovative and critical analysis of Strasbourg's Article 6 case law. The category of 'fair trial rights' includes many component rights. The existing literature tends to chart the law with respect to each of these component rights, one by one. This traditional approach is useful, but it risks artificially isolating the case law in a series of watertight compartments. The book takes a complementary (but different) approach. Instead of analyzing the component rights one by one, it takes a critical look at the case law through a number of 'cross-cutting' problems and themes common to many of the component rights. It will be useful to all those working in the fields of criminal law and human rights.