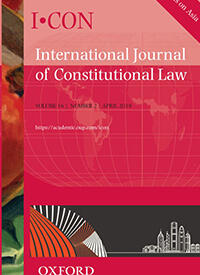 Two Steps Forward One Step Back: The Non-Linear Expansion of Judicial Power in Pakistan

Pakistan’s superior courts have evolved from marginal state institutions to key players mediating the balance of powers in a deeply divided and politically fragmented polity during seven decades of the country’s postcolonial history. Although the political salience of the Supreme Court’s recent actions — including the disqualification of two elected prime ministers — has created the sense of a sudden and ahistorical judicialization of politics, the courts’ prominent role in adjudicating issues of governance and statecraft was long in the making. The perception of an historically docile and subservient court which has suddenly become activist has been shaped by an undue focus on the big constitutional moments of regime or governmental change in which the Apex Court has more often than not sided with the military or military-backed presidency. While these constitutional cases and crises are important, an exclusive focus on this domain of judicial action hides the more significant and consistent developments that have taken place in the sphere of “administrative law.” It is through the consistent development of the judicial review of administrative action, even under military rule, that Pakistan’s superior courts progressively carved an expansive institutional role for themselves. This article highlights the progressive, though non-linear, expansion of judicial power in Pakistan and argues that despite some notable and highly contentious moments of judicial interference in mega politics, the bedrock of judicial review has remained in administrative law — i.e., the judicial review of executive action.