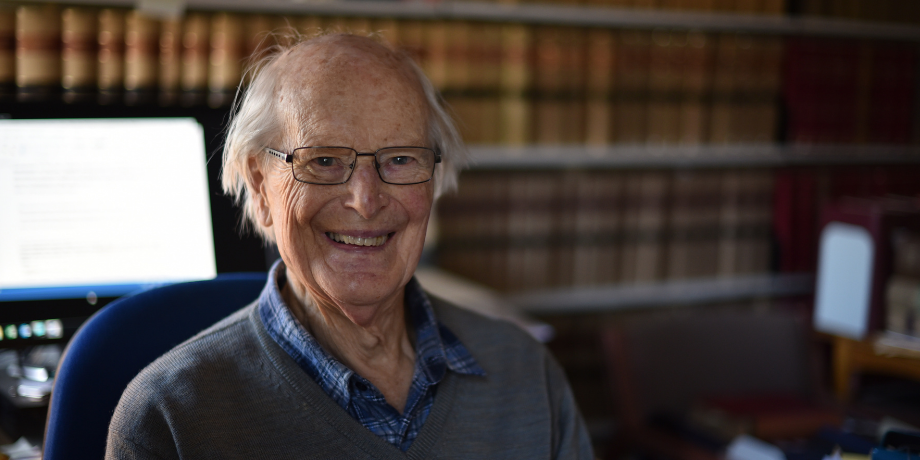 A teacher, scholar and mentor to many people, Peter Bailey's illustrious 70-year career spanned across the public service and academia.

Throughout his 30 years at ANU, Peter was a constructive participant in the development of our teaching, research and social engagement.

In reviewing his career, and reflecting on the values that guided him, it is striking to note the points of resemblance with the career of his father, Kenneth Bailey. Indeed, comparisons of their achievements began at the earliest possible moment. When Peter was born, his father was the Vice-Master of Queen’s College, the Methodist residential college at the University of Melbourne. The Centenary History of the College tells us that the students toasted Peter’s birth, their President saying ‘We hope when he comes to Queen’s he will be as worthy a representative of the College as Mr Bailey is’. The author of the History commented, ‘That, in fact, did come to pass. In 1945, Peter entered Queen’s and, like his father, won the Rhodes Scholarship.’[1]

The father and son both had distinguished careers in universities and the Australian Public Service, though in a different sequence. Kenneth Bailey was appointed to a Chair in the Faculty of Law at the University of Melbourne in 1927. In 1928, aged 30, he became the Dean.  In 1943, he took leave to move to Canberra to be an advisor to the Attorney-General’s Department. At the request of Dr H V Evatt , he was an advisor to the Australian Delegation to the United Nations when the draft Charter of the United Nations was being considered.  In 1946, he was appointed as Secretary of the Attorney-General’s Department and Solicitor-General of the Commonwealth. He was also a member of the interim Council that established the ANU. He was High Commissioner to Canada, 1964-1969.

Peter’s Public Service career – or his service to the public, as he liked to put it – started in 1946, as an assistant to Sir George Knowles, Secretary of the Attorney-General’s Department, for a short period before Knowles was succeeded as Secretary by Kenneth Bailey. Peter then completed a Law degree at the University of Melbourne. He won the Rhodes Scholarship for Victoria in 1949. After a MA at Oxford, he completed an LLM at Canberra University College, which was then an affiliate of the University of Melbourne. (The College merged with the ANU in 1961.) His degree was conferred in Canberra by Sir Robert Garran.

Two major appointments followed. From 1974 to 1976, he was a full-time member of the Royal Commission on Australian Government Administration, under the chairmanship of H C Coombs. In 1978, the Fraser Government appointed him as a special advisor on human rights, with the task of setting up the Australian Human Rights Commission. He was the Deputy Chairman and Chief Executive Officer of the Commission from 1981 to 1986.

In late 1986, I bumped into Peter by chance at a friend’s birthday party. I had met him often in various professional and social settings. I also knew his wife, Leila, who had a long career as a highly respected counsellor in the ANU Counselling Service. To my surprise, Peter told me that his career in the Public Service was about to end, when his appointment at the Human Rights Commission expired. He was shocked, and uncertain about his next step. I was the  Dean of the Faculty of Law at the ANU at that time. Our conversation led to negotiations that resulted in Peter’s appointment as a Visiting Fellow in the Law Faculty.  He would help to develop teaching and research in human rights and public law, and give students and colleagues the benefit of his experience in the Public Service. I saw this as a stimulating venture for the Faculty, and a transitional arrangement that would give Peter a chance to consider his options.

The transitional arrangement endured.  The Visiting Fellowship was renewed, and it was replaced by an appointment as Adjunct Professor from 1999 until he retired, aged 89, in 2016.

Peter maintained a full teaching load almost to the end. He always had a full quota as a supervisor of honours students undertaking research theses. They were attracted by his forward-looking research interests and his consultative style.

He published several books on human rights. The most notable was The Human Rights Enterprise: In Australia and Internationally (2009). It was launched at the ANU by the recently retired Justice Michael Kirby. He hailed the book as ‘a triumph for one of the great human rights scholars of Australia … every nook and cranny of the subject is examined’.

Throughout his 30 years at the ANU, Peter was a constructive participant in the development of our teaching, research and social engagement. He was a model of collegiality.  Some of his activities should be mentioned, to give an indication of the range of his contributions.

Drawing on his experience at the Human Rights Commission, he was an early proponent of a scheme established in 1990 to recruit Indigenous students and to provide tutorial support for them. This was a forerunner to the current ANU College of Law Indigenous Programme and the Tjabal Indigenous Higher Education Centre.

He participated in recurring discussions that sought to improve the experience of women - staff and students - in the ANU College of Law.

He was an advocate for the establishment of the Law Reform and Social Justice programme, and a supporter of its activities.

He had a leading role in establishing a student exchange scheme with the University of Alabama, and a student internship program with the Australian Public Service.

In 1992, he provided funding for the establishment of the Bailey Prize in Human Rights. The prize is awarded each year to the top student in the course Human Rights Law in Australia.

He was also a keen supporter of the Sir Kenneth Bailey Memorial Lecture series at the University of Melbourne, which commemorates Sir Kenneth’s  service as Dean of Law at Melbourne and his ‘significant part in Australia’s contribution to the formation of the United Nations’.

Peter was an active member, for many years, of several community organisations, including Relationships Australia and its predecessor, the Marriage Council; St John’s Anglican Church, Reid, and the support group, ‘Drugs in the Family’.

In 1998, he was awarded the AM ‘for service as an advocate and educator in human rights at national and international levels, and community service’. At the ANU, he received the Vice-Chancellor’s Award for Career Excellence in 2011, and the Law Dean’s Cup for service to the College of Law community in 2014.

One of Peter’s engaging quirks was his love of motorcycles. He rode onto the campus in 1987 on a BMW 800. Thirty years later, after a farewell gathering with his colleagues, he rode away on a shiny new Vespa.

At his farewell, Professor Stephen Bottomley, who was then the Dean, spoke for us all:

Peter is one of Australia’s foremost thinkers and contributors in the law on human rights, and in his time here many generations of students have had the immense benefit of his knowledge, wisdom and insight.

As his colleagues, we have also greatly enjoyed his involvement in our teaching, research and administrative activities. In his quietly spoken but passionate manner, Peter has been the embodiment of the collegial spirit that we strive to maintain.