How the art of helping others motivates law student Jenny Kei 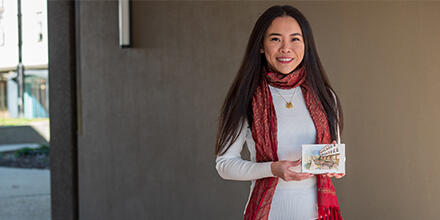 Jenny Kei is a final-year Juris Doctor whose award-winning artwok of the ANU College of Law will be gifted to Class of 2021 graduands. Photo: Tom Fearon/ANU

Donating the prize money was a way to give back to the community as well as saying thank you (to Canberra Community Law) for their supervision.

Maintaining a healthy study-life balance is important for every law student. Some like to unwind with exercise or music. Others prefer exploring the outdoors or binge-watching the latest Netflix series.

For Jenny Kei, happiness is a blank canvas and her paintbrushes.

“I started (painting) when I was seven years old. I still remember my first picture – it was a building with fireworks in the background,” says Jenny.

“Art has always been a hobby on the side for me. My favourite genre is classical and Renaissance art and artists, such as Johannes Vermeer.”

While art has traditionally been a solitary passion for the final-year Juris Doctor (JD) candidate at The Australian National University (ANU), Jenny’s talents have gained wider attention since being named the inaugural winner of the ANU College of Law graduation art competition.

The competition invited students and alumni to illustrate the ANU College of Law. As the winner, Jenny’s artwork – a watercolour depicting the College’s moot court building and north wing – will be printed, framed and gifted to mid-year law graduands later this month.

“I thought about what makes it (ANU College of Law) memorable to me as a student. I think that, architecture-wise, it’s really interesting seeing the old law building next to the new moot court building,” says Jenny.

Encouraged to enter the competition by her partner, who is among the ANU College of Law’s mid-year graduation cohort, Jenny was inspired to create an artwork that was “a bit more romantic through my use of colours”.

“I thought about the best angle to capture the memories I have as a student. I sometimes sit out here (near the north wing) to have my lunch and just watch people. It’s a really special place for me,” she adds. 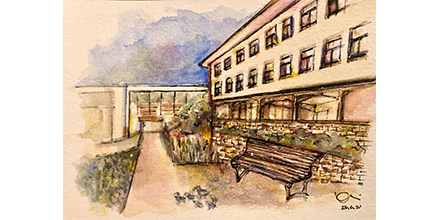 Among the eye-catching elements of her artwork were some iconic feathered friends.

“I think the ducks are such a big part of the ANU College of Law; you see them around here all the time and I like taking pictures of them,” says Jenny.

Prior to her Juris Doctor studies, Jenny graduated from ANU with a Bachelor of Arts/Science in 2016. She then completed a Master of Public Health at the University of Sydney, before deciding to pursue her law studies.

One of her most meaningful experiences at law school has been an internship she undertook with Canberra Community Law.

“There are so many systematic changes you can effect with a law degree. Throughout my JD degree, the professors have really challenged my view of the world,” says Jenny.

“It’s disheartening to know there’s a lot of disadvantaged groups and clients who aren’t able to get access to justice.”

Motivated to study law by her desire to make a difference in the lives of marginalised people, Jenny’s commitment to this mission was reinforced by her decision to donate her $500 prize money from the competition to Canberra Community Law (CCL).

“Canberra Community Law provides invaluable legal services to the most vulnerable people in our community. It is underfunded by the government and without further support, especially in the time of a pandemic, access to justice would be impeded," says Jenny.

"I was inspired during my internship with their tireless work, and donating the prize money was a way to give back to the community as well as saying thank you for their supervision.”