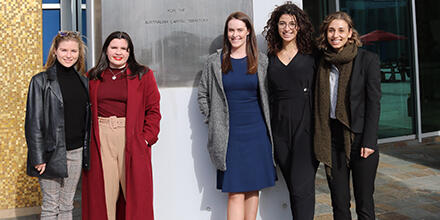 It was fantastic to see our submission have a real impact on the Inquiry, reaffirming our capacity as students to make meaningful contributions to law reform that tackles climate change in a just manner.

Editor’s note: The following article is by Isabella Boone, a Juris Doctor candidate at The Australian National University (ANU) and member of ANU Law Reform and Social Justice project GreenLaw. It provides an account of GreenLaw’s submission and testimony to the Inquiry into Renewable Energy Innovation in the Australian Capital Territory (ACT) before the ACT Legislative Assembly on Tuesday 8 June 2021. In their submission, GreenLaw advocated for the potential implementation of community-scale battery storage systems in the ACT.

On 8 June 2021, I joined GreenLaw founder Annika Reynolds in speaking on behalf of our team before the Australian Capital Territory (ACT) Standing Committee on Environment, Climate Change and Biodiversity’s Inquiry into Renewable Energy Innovation in the ACT. Our testimony expanded on our written submission to the Inquiry on the benefits of community-scale batteries and how to incentivise their uptake in the ACT.

Community-scale batteries are an emerging technology and exciting development for community energy viability across Australia. Community-scale batteries are a way to empower communities to act on the climate crisis and to increase the security of energy supplies even during natural disasters. In fact, in May 2021, a community battery was installed in Mallacoota to protect the electricity supply during bushfires.

Our testimony provided a detailed legal and regulatory analysis for the Inquiry, outlining how community-scale batteries could be implemented across the ACT. Our submission highlights that the ACT could become a global leader in clean, community-focused energy that saves our planet, saves our households on bills, and empowers every Canberran to contribute to tackling the climate crisis.

In our submission, we recommended to the ACT Inquiry:

The Inquiry was intrigued by our submission, requesting we come and speak to the Inquiry directly. We were one of just eight groups that presented to the Inquiry, which highlights the practical recommendations and reforms we proposed.

Annika and I, in our oral testimony, focused on the equity benefits of community-scale batteries and feasible reforms to the Next Generation Energy Storage Program to roll-out community energy storage. The Inquiry was really interested in this and asked numerous questions about the purpose, benefits and implementation of community-scale batteries in the ACT. We were excited to get a dialogue going with the Inquiry, so that we could explain in detail the numerous benefits of a community-scale battery, how they function, our recommendations on ownership models of the battery, as well as suggestions on implementation strategies.

Overall, we made three major recommendations to the Inquiry in our oral submission, which can be viewed here.

First, that all renewable energy projects, specifically community-scale batteries should be implemented through a human rights framework, in line with the ACT government’s endorsement of the Fossil Fuel Non-Proliferation Treaty and ACT Labor-Greens Governing Agreement. This entails a just transition away from fossil fuels, pursuing the right to a healthy environment and adequate access to energy transitions.

Third, we addressed the need to transition away from gas as quickly as possible in the ACT. This included the recommendation to bring forward the finalisation of the plan to phase out gas in the ACT. Community-scale batteries are a cleaner and cheaper way to ensure electricity security, and we emphasised to the Inquiry that gas is a fossil fuel that is directly contributing to climate change and poor health outcomes for Canberrans. Phasing out gas is an opportunity for the Inquiry to demonstrate renewable energy innovation in urban planning, not just technology uptake.

Giving evidence to the Inquiry on a project that our team had worked for over 50 hours on was an incredibly rewarding experience. It was humbling to speak alongside Annika and represent the work of our entire team, namely: Peta Bulling, Lilly Deluca, Harry Fell and Penelope Hallam. We were also lucky to have the support and input from ANU College of Law senior lecturer Dr James Prest on our submission.

It was fantastic to see our submission have a real impact on the Inquiry, reaffirming our capacity as students to make meaningful contributions to law reform that tackles climate change in a just manner. We look forward to seeing the results of the Inquiry as tangible action in the ACT.