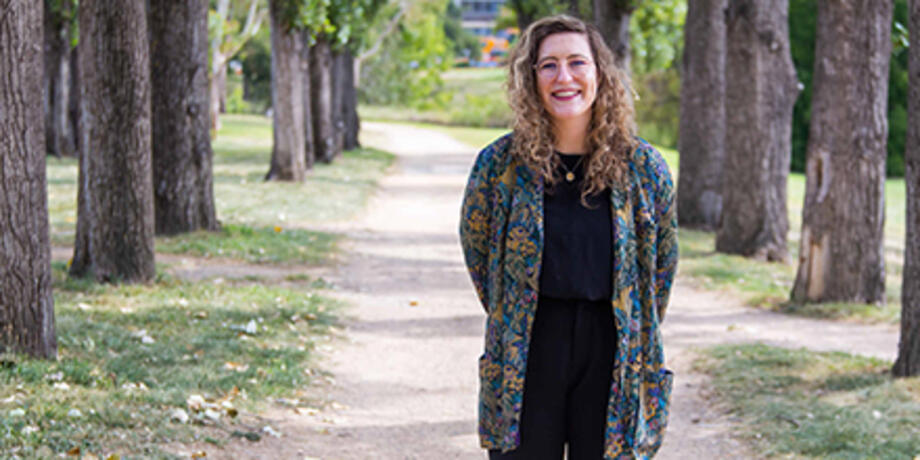 Madeleine Castles is an ANU Bachelor of Arts/Laws (Hons) student and one of three co-authors of a Federal Law Review article. Photo: Tom Fearon/ANU

The law must do better to prevent harassment and provide accessible, adequate remedies for those who experience it.

A new study has found that many targets of sexual harassment in Australia face a risky and costly road to justice despite a landmark civil case in 2014 that set a new benchmark in damages. The study, ‘Rethinking Richardson: Sexual Harassment Damages in the #MeToo era’, has been published in a forthcoming edition of The Australian National University (ANU) College of Law research journal, Federal Law Review.

In 2014, the full Federal Court awarded Rebecca Richardson, who had sued her former employer for sexual harassment, $100,000 after Justice Susan Kenny deemed the initial damages award, $18,000, to be “manifestly inadequate”.

“We wanted to look at the impact of that decision handed down in 2014 and whether it had resulted in wholesale increases in damages in sexual harassment litigation. We also wanted to examine the impact of the #MeToo movement, which has had a significant influence on prevailing community standards,” said Ms Castles, who previously worked with Mr Pender on the International Bar Association’s global campaign to address sexual harassment in the legal profession.

Of the 50 decisions that cited Richardson, nine involved sexual harassment and six awarded general damages. The average award was around $80,000, or around four times the amount awarded pre-Richardson, according to the study.

In the study’s qualitative analysis, the authors investigated the out-of-court settlement of sexual harassment matters since 2014.

“We wanted to see if Richardson had impacted sexual harassment behind closed doors. We spoke to eight leading anti-discrimination law practitioners in Australia – including Kate Eastman SC, Josh Bornstein and Michael Harmer, whose law firm represented Rebecca Richardson – to discuss whether Richardson had had an impact and, more broadly, if the #MeToo movement had driven systemic social change from their perspective,” said Ms Castles.

“We ultimately discovered the whole system is pretty broken. For starters, it is very individualised; it requires individuals targeted by sexual harassment to bring a claim. A union can’t bring a claim nor can the Australian Human Rights Commission, as per the Sex Discrimination Act 1984 (Cth). That comes with serious consequences both in terms of finance and mental health, and means the individuals are forced to carry the burden of this law which was introduced to drive societal change.

“For most victims, the costs of sexual harassment litigation are often very prohibitive. If you’re not a high-income earner, you’re unlikely to have the financial means to pursue a claim,” she added

Thread: For ~2 years, Madeleine Castles, Tom Hvala & I have been working on a major project about sexual harassment litigation. It was published today, in @FederalReview. We've reviewed ~50 cases & interviewed practitioners. A summary, via @THEMONTHLY https://t.co/reXvFHAKFc

While the amount awarded in Richardson led the case to be hailed as a landmark in 2014, interviewees in the study emphasised the context of the decision; six years of litigation combined with exorbitant legal costs, mental anguish and an uncertain outcome can have a devastating impact.

“If you’re talking about getting justice for claimants, the price is very, very high,” said Ms Castles.

“Most depressingly, our research revealed Richardson and the #MeToo movement in general had done little to shift employer attitudes to sexual harassment. Just because a workplace may have to pay a higher amount in settlement does not necessarily mean they will enact systemic change across their workplace. The prevalence of non-disclosure agreements enables workplaces to focus on isolated, confidential incidents, meaning there is often little incentive to introduce structural reforms.”

The Federal Law Review study comes during a week in which workplace sexual harassment has generated national debate in Australia. On 15 March, thousands rallied at Parliament House for the women’s March 4 Justice to protest sexual harassment and gendered violence. Meanwhile, senior government and legal figures including the Attorney-General, Christian Porter, and former Justice of the High Court of Australia, Dyson Heydon AC, QC, have also been accused of sexual harassment.

“As recent events have sadly underscored, workplace sexual harassment in Australia remains widespread. The law must do better to prevent harassment and provide accessible, adequate remedies for those who experience it,” said Mr Pender.

“This is important research which offers practical policy insight into one of the most compelling issues of our time. The Sex Discrimination Commissioner, Kate Jenkins, directly identified the need for research of this nature in her landmark National Inquiry into Sexual Harassment in Australian Workplaces. We have sought to address that gap.”

The Global Institute for Women's Leadership, chaired at ANU by the Hon Julia Gillard AC, has committed to funding the second phase of this research project, Mr Pender confirmed.

“We intend to continue to seek a practical, experience-informed understanding of the challenges plaintiffs face in navigating the legal system and use this research to locate potential solutions,” he said.

The co-authors acknowledge the support of their study’s interviewees in addition to input from Emerita Professor Margaret Thornton FAAL, FASSA, socio-legal and feminist scholar at ANU College of Law; Dr Gabrielle Golding, lecturer at the Adelaide Law School; and Sara Carnegie, legal director at the International Bar Association..