We’re very privileged to have access to so many world-renowned academics as well as parliamentarians, legal professionals and policymakers.

The Australian Crisis Simulation Summit (ACSS) is gearing up for its second year with an emphasis on inclusion and expertise, making its mission of developing the next generation of national security leaders a truly Australia-wide exercise.

Headquartered at The Australian National University (ANU) and set to run 13-17 September 2021, this year’s summit will for the first time feature virtual hubs across major cities in Australia where 70 delegates will participate in eight panel discussions and workshops, three crisis simulations and a realistic hypothetical under the guidance of high-level mentors based nationwide.

“A large portion of what we do is research-based, from the participation of the team to the delegates, and our focus this year is on skills-based learning. We want to engage students from a broad range of degrees and disciplines.”

The lead academic consultants for each of the three simulations are Dr Cassandra Steer FHEA (ANU Institute of Space, ANU College of Law), who will oversee a non-traditional simulation in space; Dr Dominique Dalla-Pozza (ANU College of Law) and Katherine Mansted (Cyber CX), whose simulation addresses foreign interference; and James Batley (ANU Department of Pacific Affairs), a distinguished policy fellow who will head the Pacific simulation.

Finally, there will also be industry partners from space (Gilmour Space Technologies, Southern Launch and Electro Optic Systems) in addition to the Commonwealth Bank of Australia, Cyber CX, and the Australian Army Research Centre.

While the online delivery of events has become a familiar reality for many in the pandemic age, ACSS organisers identified other benefits of taking a tech-infused approach. This year’s summit will include students and experts from rural and regional parts of the country, bringing the national security conversation well beyond the traditional hubs of Sydney, Melbourne and Canberra.

“We want this to be an event where people with an interest in national security can come together, rather than having them in an international relations or security studies silo. We want people to engage across a wide spectrum because that’s when they tend to yield the most informative solutions,” said Isaac Hayne, ACSS deputy director.

This year the summit has been opened up to undergraduate and postgraduate students in their second year and above, with the aim to achieve greater diversity in disciplines, ages and experience.

“We’re very privileged to have access to so many world-renowned academics as well as parliamentarians, legal professionals and policymakers. It’s our responsibility to be able to share this expertise with students across Australia who might not ordinarily have access to such experts,” added Gemma, a penultimate-year Bachelor of International Security Studies/Laws (Hons) student at ANU.

“These are issues that affect everyone and we want to include as many people as possible in the national security conversation because that’s how we feel we are going to develop the most effective solutions.” 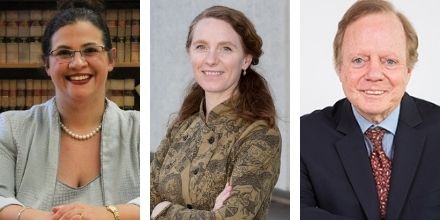 Each of the three crisis simulations is comprised of several stages. Delegates will receive push notifications and emails through the conference software, Conductrr, based on their role.

The simulations are intense, with some lasting five hours and involving high-pressure scenarios. The aim is to hone participants’ ‘hard skills’ – communication, collaboration, problem-solving and critical thinking – in a national or international security context.

For example, last year’s domestic crisis simulation involved a cyber-attack on waterways in New South Wales, which affected cities’ water supplies and led people to become sick. It required a coordinated response from a government emergency management agency that included the communications officer receiving directives about writing a media brief and the policy officer determining steps to be taken based on state resources. As each stage progresses and different decisions are taken, the software allows the simulations to change and react to these actions in real time.

A returning innovation this year is the integration of a full live television studio, complete with real journalists and newscasters presenting news bulletins with analysis by experts on delegates’ decisions.

“There isn’t a ‘winning’ scenario, per se, although there are some that we would elevate above others. I’d contend that we do write the preferred outcome based on the research we’ve conducted,” said Isaac.

“The end result will definitely highlight good modes of practice. By working together and broadening their scope of consultancy across governments, delegates will be able to determine the actual problems and not overlook details that prove critical. That being said, even if ‘poor’ decisions are taken that’s fine too because it’s all about the learning experience. There’s no determinant end.”

The ACSS also provides a forum for students to get to know those who may be their future educators, colleagues or employers.

“In addition to networking with our partners in academic, industry and government, it’s also about getting students to form their networks between themselves. If these are the people we’re going to be working with in two, five or 10 years, it’s great to be forming those connections now and learn how to work together,” said Gemma.

For students seeking a challenge that deepens their knowledge of the law and its intersection with national security, the constitution, space and other disciplines, the ACSS offers an authentic window into these fields.

“The areas of law we address in the summit are emerging, dynamic and timely. We’re at a really interesting point of development in space law, for example. We’ve seen the establishment of the Australian Space Agency, which is tasked with supporting industry and has intersections with domestic, public, international and national security law,” said Gemma.

“Counter-terrorism legislation since 9-11 has increased exponentially. For law students interested in national security, this provides an interesting lens for looking at the role of the courts and the legislature in governance. For international law, there is a lot at play between Australia and its Pacific neighbours.”

And if a week of high-stakes scenarios sounds like extra pressure for students recovering (or bracing) for the stress of exams and assignments, you’d be mistaken. Developing a whole-of-government approach to tackling national security brings with it a whole lot of personal and professional rewards.