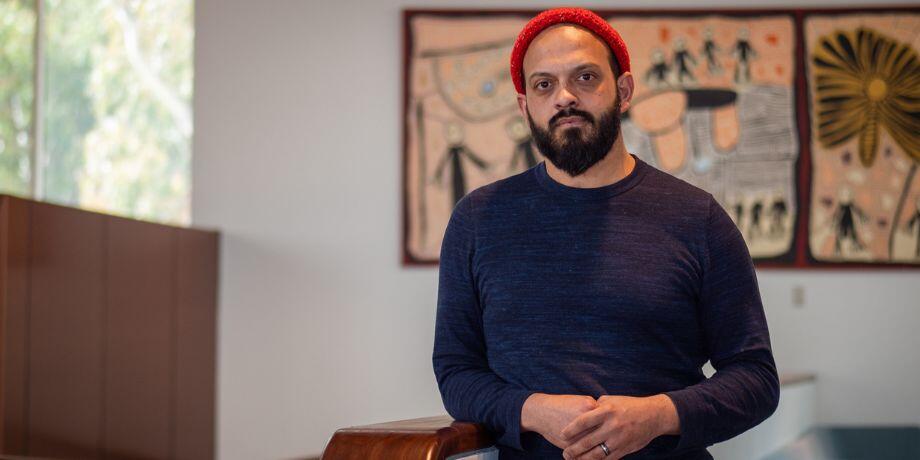 Sarouche Razi hopes to use his arts residency at ABC Radio National to communicate his research to new audiences. Photo: Tom Fearon/ANU

I think if you come with a different identity, you experience law differently. Being Afghan, Iranian and Muslim, my relationship with the law might be very different to many other people who live here.

Lawyer, storyteller and PhD candidate gets boost in research exploring how art practices can be used to advance coronial justice for Aboriginal and Torres Strait Islander peoples

Sarouche Razi, an interdisciplinary researcher at The Australian National University (ANU) College of Law, has secured his place among Australia’s brightest emerging minds in the arts after being awarded an ABC TOP 5 media residency. The residencies enable emerging scholars to engage with the ABC’s expert communicators, so that the scholars can better share their research with all Australians.

Prior to his doctoral studies, Sarouche worked as the principal solicitor at Kimberley Community Legal Services in Kununurra and Broome, Western Australia, where he was one of the key counsel in a large-scale inquest between 2017 and 2019 into youth Aboriginal deaths.

“A big part of my work is thinking about how law is received,” said Sarouche, a PhD candidate whose research explores the ways the state punishes First Nations peoples in the Kimberley using civil law mechanisms.

Sarouche will spend two weeks at ABC Radio National’s studio in Melbourne as part of his residency, working with some of Australia’s best arts journalists and broadcasters.

Being awarded the residency has delivered a boost for Sarouche, who noted the early-career researcher pathway can feel like a “isolating experience” at times.

“Whenever there's an opportunity to take stock and be told that your work is important, it makes a difference. I'm grateful because I think there's recognition that the work I'm doing is useful and significant and has the potential to prompt Australians to think about these questions,” he added.

Having worked at national law firms and community law clinics, in Australia’s metropolises and remotest outposts, Sarouche’s experience in the profession has been shaped by his practice across diverse areas and advocacy on behalf of marginalised clients.

Through his research, Sarouche is examining how the arts and particularly ‘biomythography’ – a concept developed by African-American poet, feminist and civil rights activist, Audre Lorde – can guide critical approaches to legal practice.

Drawing on personal experiences, spirituality and mythology provides a counterpoint to ‘traditional academic notions’ grounded in neutrality and objectivity.

“Yet in all of that ‘objectivity’, how is it that 30 per cent of people in prison are Aboriginal and Torres Strait Islander, despite this group only accounting for 3 per cent of the population? The ‘objectivity’ hasn't helped; if anything, it's a a mask for what I would describe as colonial violence.”

Although biomythography might be a novel approach in legal research circles, Sarouche knows how amplifying historically silenced voices can make a difference, particularly from his work on police and prison complaints.

“[As a lawyer], I started looking at other ways to support clients to tell their stories. I found podcasting to be a very useful medium because of its long format that really allows clients to tell stories on their own terms,” he explained.

“I found that I was using a lot of non-traditional mechanisms to tell legal stories. And the more I did that, the more I understood, ‘Well, there's law in that, too.’ People just need to expand how they look at law outside of its traditional conception.”

Identity is also a key factor that influences our understanding and interaction with the law, Sarouche added.

“I think if you come with a different identity, you experience law differently. Being Afghan, Iranian and Muslim, my relationship with the law might be very different to many other people who live here,” he said.

“I'm using this (biomythography) method in my research because I want to interrogate who I am. What does it mean to be, say, a settler, albeit one from lineages also impacted by colonisation? It’s about turning the gaze within interrogating myself as an active participant in my work, free from broad ‘objective’ positions.”

In addition to his PhD studies, Sarouche convenes the Prison Legal Literacy Clinic at ANU that allows law students to work with detainees at the Alexander Maconochie Centre.