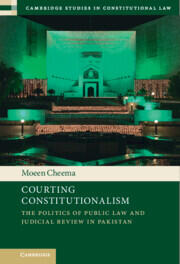 Over the last decade, the Supreme Court of Pakistan has emerged as a powerful and overtly political institution. While the strong form of judicial review adopted by the Supreme Court has fostered the perception of a sudden and ahistorical judicialisation of politics, the judiciary's prominent role in adjudicating issues of governance and statecraft was long in the making. This book presents a deeply contextualised account of law in Pakistan and situates the judicial review jurisprudence of the superior courts in the context of historical developments in constitutional politics, evolution of state structures and broader social transformations. This book highlights that the bedrock of judicial review has remained in administrative law; it is through the consistent development of the 'Writ jurisdiction' and the judicial review of administrative action that Pakistan's superior courts have progressively carved an expansive institutional role and aggrandised themselves to the status of the regulator of the state.