War and Peace in Outer Space

This book delves into legal and ethical concerns over the increased weaponization of outer space and the potential for space-based conflict in the very near future. Unique to this collection is the emphasis on questions of ethical conduct and legal standards applicable to military uses of outer space. No other existing publication takes this perspective, nor includes such a range of interdisciplinary expertise.

The essays included in this volume explore the moral and legal issues of space security in four sections. Part I provides a general legal framework for the law of war and peace in space. Part II tackles ethical issues. Part III looks at specific threats to space security. Part IV proposes possible legal and diplomatic solutions. With an expert author team from North American and Europe, the volume brings together academics, military lawyers, military space operators, aerospace industry representatives, diplomats, and national security and policy experts. The experience of this team provides a collection unmatched in any academic publication broaching even some of these issues and will be required reading for anyone interested in war and peace in outer space. 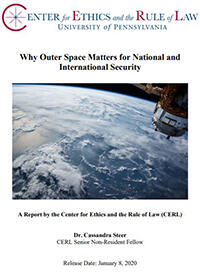 Why Outer Space Matters for National and International Security

Despite the fact that outer space may only be used for peaceful purposes under the 1967 Outer Space Treaty, most technologically advanced States today have a high military dependence on space. In other words, space is “militarized,” but not yet “weaponized.” At the same time, a space arms race has been underway for some time, and appears to be accelerating in recent years. In 2019, India joined what it proudly dubbed the “elite club” of States with the capability to launch direct ascent anti-satellite weapons, replicating earlier tests by China, Russia and the U.S., all of whom have also demonstrated more covert forms of anti-satellite or “counterspace” technologies. The establishment of the U.S. Space Force at the end of 2019 and the response of allies and adversaries alike is emblematic of the escalatory cycle that appears to be in place. Today nearly every country is dependent in some way on space-enabled capabilities, many of which are supplied not by States but by commercial entities. This report outlines the historical and legal context, and argues for increased cooperation and transparency to improve the stability and security of outer space for national and international security.

Who Has the Power? A Critical Perspective on Space Governance and New Entrants to the Space Sector

Space law and space politics are determined by the same big players as terrestrial geopolitics, and therefore in asking how to govern space, we have to take the current realities of international relations and international law into account. How are new entrants interacting with the international space law regime inherited from the Cold War, and what kinds of new governance structures might we need to deal with the increasing number and kinds of participants emerging in the space sector? I take a critical perspective, drawing on feminist legal theory and Third World Perspectives on International Law (TWAIL) to pose further questions: who is exercising power over the development of new legal and governance norms in space and who is excluded from this? I argue that, because we are all so dependent on space for our contemporary existence, 21st century space governance needs to take into account more than the interests of the biggest players.

Although space was envisaged to be a global commons, in recent years there have been policy shifts that reflect the desire to exert a more dominant presence in outer space, with more proactive, aggressive space security strategies. The notion of a global commons has come under threat, and there is a risk of an emerging space arms race and even of a conflict in space. There is, therefore, a renewed need for restraint in space for both national and global security and for more clarity on the ways in which military and security activities are limited by existing international law.

The Use of Space Technology Export Controls as a Bargaining Solution for Sustainability: A Chicago Convention Model of Space Governance

With the increase in space debris and space traffic, there is growing awareness that sustainable use of space requires improvements in global space governance, yet no binding international treaty has been concluded for almost four decades. There is little national incentive for countries to enter into binding instruments that may impose limits on their freedom of action: key issues such as space debris and space traffic management may not immediately threaten national interest. However, they threaten the collective interest in the long term, and the question is how to incentivize States towards creating new space governance instruments to ensure sustainable use of space. Successful international treaties can be described as the striking of a “bargain”, whereby States accept limits on their behavior in exchange for the cooperation of other States. This paper proposes a model similar to the 1949 Chicago Convention on International Civil Aviation, widely seen as the regulatory pillar upon which global civil aviation was built. The Chicago Convention successfully continues to adapt to technologies and to provide incentives for State Parties to comply, due largely to the key mechanism of the technical Annexes. State Parties agree to comply with uniform standards and recommended practices (SARPs) for the safety and efficiency of air navigation in exchange for the cooperation of other States. Hence there is significant short term economic incentive to comply. This paper proposes a new international convention for civil space activities, which would incorporate SARPs for safety and sustainability in outer space. National space technology export control mechanisms can be used by States to incentivize compliance: States could refuse to export space technologies to non-complaint States. Thus, the bargaining mechanism would ensure compliance with long term sustainability interests based on the short-term incentive of access to space technology.

Conflicts in Space: International Humanitarian Law and Its Application to Space Warfare

This article discusses the ways in which International Humanitarian Law (IHL) applies to the domain of outer space. IHL is applicable as a matter of international law, yet outer space poses some challenges when it comes to specific principles and rules. A brief outline is given of some of the kinds of weapons that have been and might be used in space, as well as the ways in which space assets are used with respect to conflicts on Earth. This is followed by an in depth analysis of the core principles of IHL and how they apply: the principles of distinction, proportionality and precaution in attack. While it is imperative that States recognise that IHL is applicable to all their activities in space that involve conflicts on Earth and/or in space, care must be taken in weighing up the traditional principles and their application to this new domain. As the technology that increases war-fighting capability advances, so does the imperative to understand the applicable legal framework for the use of such technology.

Conflicts in Space and the Rule of Law

The applicability of international humanitarian law (IHL) is not dependent on any domestic legal system, however its enforcement is at least partially subject to domestic application. There are scenarios in which States assert they can derogate from IHL and other rules of international law due to emergency or threats to security. When it comes to hostilities that take place in or through Outer Space, the fact that Outer Space may not be appropriated as sovereign territory means that regulation of military activities and their consequences are truly international. No State can exert exclusive jurisdiction over a breach of IHL that takes place “in” Outer Space. However this also means there is a greater risk of abuse of the rules of IHL by the creation of new legal black holes; if it’s up to individual States to interpret and apply these rules, they may attempt to justify unlawful derogations in the name of emergency or security. Generally IHL must apply to space in the same ways it applies to terrestrial conflicts, in the sense that justifiable derogations for reasons of national security are truly exceptional and very limited. The question then arises, can States derogate from either the space treaties or from IHL under claims of State security? This paper argues that the international rule of law ensures their continued application in times of conflict in Outer Space, and provides a set of principles that ensure the risk of legal black holes is limited.