Home » Students get creative for group assignments on law, art and colonisation

Students get creative for group assignments on law, art and colonisation 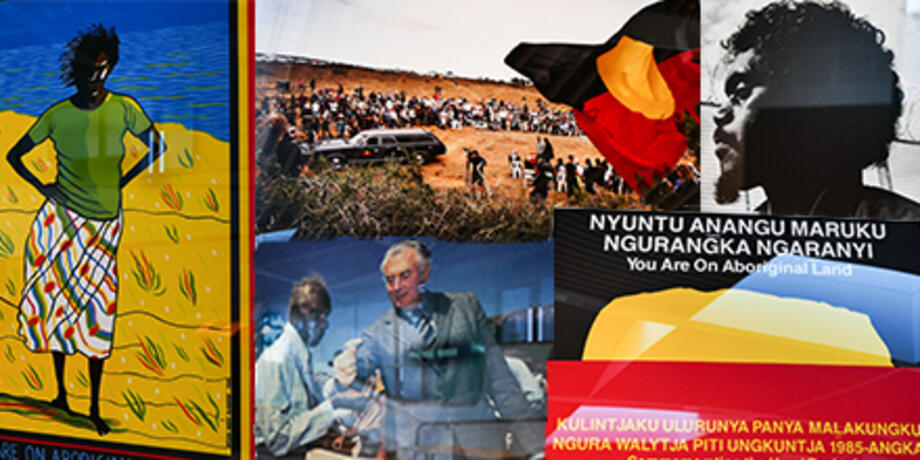 Students in Law and Art: Representation and Critique (LAWS2290/4231) produced videos with their reflections of artworks from the ANU College of Law collection curated by Professor Tim Bonyhady AM, FAAH, FASSA.

It was confronting to realise how the law has, and continues to be, a force that inhibits the rights that Indigenous people have to their land.

Art and multimedia may not immediately come to mind when you think about traditional law school assessments, but students at The Australian National University (ANU) College of Law recently embraced both for a memorable group assignment.

Law and Art: Representation and Critique (LAWS2290/4231) is a course that introduces students to theories and methods in law and visual studies. Through analysing key texts and artworks, students learn to see both law and art through different eyes across themes including justice, power, ideology, colonialism, environment and war.

Jointly convened by co-directors of the ANU Centre for Law, Arts and the Humanities, Professor Desmond Manderson FAAL, FASSA, FRSC and Professor Tim Bonyhady AM, FAAH, FASSA, the course’s group assignment this semester required students to work in small groups and study a contemporary piece of visual art addressing issues in Indigenous peoples and the law in Australia since 1945. 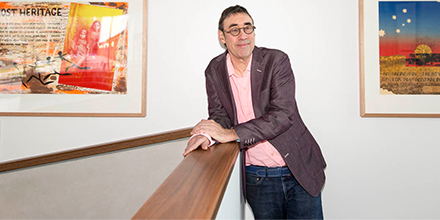 Choosing from more than a dozen posters, screen prints and photographs in the ANU College of Law’s collection of artworks curated by Professor Bonyhady, each student group produced a five-minute video in which they reflected how the aesthetic form and design of the work relates to or challenges legal and political issues.

“We originally designed this video assessment out of necessity: COVID-19 made it impossible for us to teach the class in front of the artworks themselves. But we were really blown away by the amount of work all the students did on their chosen artworks,” said Professor Manderson.

“They did lots of extra research to find out about the background of the images, the legal and historical context that made it so significant. Their ability to put this information and reflection into video form in a way that was really interesting was also extremely impressive.” 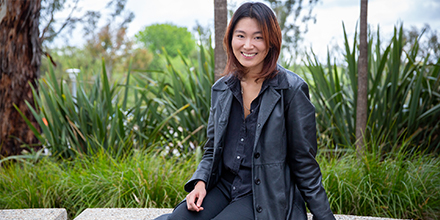 Esther Kwon chose to study a bilingual artwork depicting the return of Uluru.

Esther Kwon, a Bachelor of Laws (Hons)/Visual Arts student, said her group chose to study ‘Nyuntu aṉangu maruku ngurangka ngaṟanyi’ (‘You Are On Aboriginal Land’) by Chips Mackinolty (1954-) because it “stood out … as a rare example of an artwork that utilised an Indigenous language as its mode of communication”.

The 1985 screenprint commemorates the handback of Uluru to the Traditional Owners, incorporating Anangu, a Western Desert language spoken in Central Australia.

“I found it exceptional to realise that so many artworks addressing Indigenous Australians had utilised the English language. I felt this artwork confronted my own habitual acceptance of the English language as the authoritative form of communication in Australia,” Esther said.

“It was confronting to realise how the law has, and continues to be, a force that inhibits the rights that Indigenous people have to their land. I have begun to critically examine our current laws surrounding land title and Indigenous Australians.” 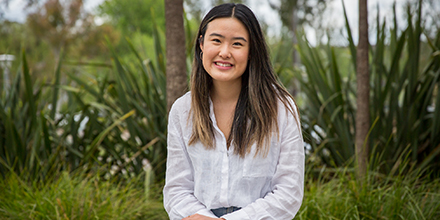 Linda Cao, a Bachelor of International Security Studies/Laws (Hons) student, said the course “reinforced that art is certainly not innocent to the politics of colonialism”.

“Our group was drawn to the colours of the artwork and the unique ballot-like design. We have also explored the history of disenfranchisement of Indigenous Australians in other courses and were interested in exploring how the artwork related to these issues, especially as this artwork was commissioned by the Australian Electoral Commission,” she said. 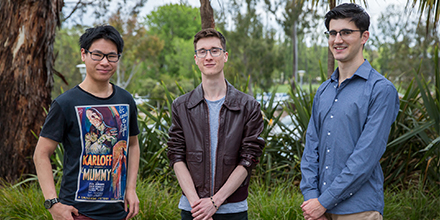 “The experience of analysing the collection of images was one of the most challenging tasks of my law degree. Through learning and applying art theory to Indigenous representations of colonisation, my understanding of Australian law was challenged to consider perceptions past, present and future of the events of colonisation in a legal context,” said Jacqui, a Bachelor of Commerce/Laws (Hons) student.

“Using art to understand the relationship between law and Indigenous Australians enhanced my ability to consider numerous perspectives when interpreting the law,” she added.

Indigenous artworks of this event subvert the narrative of Cook's landing, the students argue in their video assignment:

"While terra nullius was not standard British policy at the time, the relative powerlessness of the natives - along with the urgency from competing imperial claims that would cement the land as a veritable New Holland - meant that Bedhan Lag (the Indigenous name of Possession Island) would become 'ground-zero' for more ambitious and unconventional memes for conquest."

While the transition to online teaching was driven by COVID-19, Professor Manderson said the enthusiasm displayed by students toward the group assignment “really sold us on the idea of using creative and cooperative approaches to teaching”.

“The fact that the groups really worked together to teach themselves and to find a way of teaching it others through the videos, resulted in a kind of deep learning and engagement that you don’t always see through traditional methods. The final videos – particularly the ones we’ve chosen for a wider audience – were incredibly rewarding for the students but equally rewarding for us,” he added.

Find out more about the ANU Centre of Law, Arts and the Humanities' Indigenous Art and Politics exhibition at the moot court foyer here.