Home » Making a difference: How my time at ANU Law shaped my world views and career path

Making a difference: How my time at ANU Law shaped my world views and career path 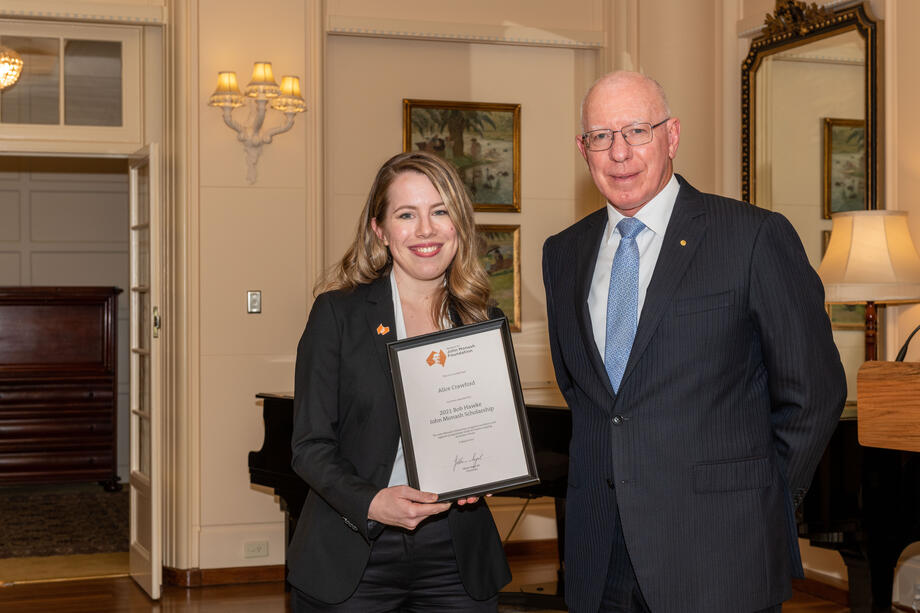 Alice is the recipient of the 2021 Bob Hawke John Monash Scholarship which she plans to use to study a Master of Public Administration at Harvard.

My driving passion has always been the protection of vulnerable workers. It’s the reason I became politically active as a teenager, went to law school, and now work in the Australian Parliament.

For Alice Crawford (BA '14/LLB (Hons I) '14, GDLP '16), protecting vulnerable people has always given her purpose and drive in her studies and throughout her career.

Growing up, Alice’s desire to make a positive impact in society spurred her to become politically active as a teenager. This eventually led to her undertaking her Bachelor of Arts/Laws (Honours) degrees, and later a Graduate Diploma of Legal Practice at The Australian National University (ANU).

During her time at the ANU, she served as President of ANU Law Students’ Society and as a student editor on the Federal Law Review. It was during this time that her career path and ambition to effect change began to take shape.

Alice currently works as an adviser to the Hon Anthony Albanese MP, Leader of the Australian Labor Party. Her journey and her work in the Federal Parliament has allowed her to pursue her passion of helping vulnerable workers and make a tangible impact in their lives through legislation.

In this Q&A, Alice reflects on how her time at ANU and how it helped pave the way in turning a childhood passion into an emerging career.

1.    Can you tell us a bit about yourself, including your current role and what inspires you?

My driving passion has always been the protection of vulnerable workers. It’s the reason I became politically active as a teenager, went to law school, and now work in the Australian Parliament.

I’m currently an adviser to the Leader of the Australian Labor Party. Being an adviser is an incredible privilege, and it’s allowed me to work on some important policy issues, from modern slavery to foreign bribery, whistleblowing and superannuation. The highlight of my career to date was working on the campaign for a Modern Slavery Act for Australia.

Working in politics can be challenging, but it’s also uniquely meaningful and rewarding. I still pinch myself sometimes walking through the Parliament. I’d really encourage any student at the ANU College of Law – particularly people who might not see themselves reflected in our Parliament – to consider getting involved in politics if you’re passionate about law reform or social change. Politics can only be improved by good people putting their hands up to participate.

2.    You were recently awarded a John Monash Scholarship, which you will use to study a Master of Public Administration at Harvard. Can you tell us more about why you are choosing this path and the benefits you hope it will bring?

The John Monash Scholarship is a uniquely Australian scholarship which celebrates one of our greatest leaders, General Sir John Monash. Each year it allows a small group of scholars from different backgrounds and fields to study overseas. It’s really exciting to be joining a network of scholars who want to make Australia a better place.

I’m deeply concerned about the issue of modern slavery. I think Australia should be leading the world in our response to modern slavery, but we haven’t done nearly enough. So many products that we use every day come from supply chains with appalling human rights conditions – from the clothes we wear, to the food we eat and the technology we rely on. I’ll be using the scholarship to improve my policy development skills at the Harvard Kennedy School, and then I hope to come back to Australia and focus on improving workers’ rights and human rights in supply chains.

I’m particularly honoured to be the 2021 Bob Hawke John Monash Scholar. Bob Hawke was a hero of mine, and he transformed Australia. So many things that we take for granted – Medicare, the protection of our world heritage sites, and our laws against sex discrimination, to name just a few – are achievements of his government.

3.    Working in the public sector for most of the past few years, can you tell us more about how your time at ANU shaped your views and career outlook?

The ANU Law School had a massive impact on the way I see the world and my career path. It taught me about how our government works, how our laws are made, and how to be an advocate. It left me with a really strong belief in the public good and in our public institutions.

When I graduated, I worked as a lawyer at Allens and later spent some time at the Refugee Advice and Casework Service in Sydney. It was a real privilege to have the opportunity to represent people, especially vulnerable and refugee clients, through pro bono work. Although I’ve now left legal practice to work in the Parliament, I still use my law degree every single day.

The ANU law school also had a huge personal impact on me. Not only did I leave the ANU with a group of friends for life, I also met my husband David Rowe on the law school lawn.

Students I went through law school with are now doing great work as barristers, public prosecutors and legal aid lawyers. But they’re also journalists in the national press gallery, civil servants, teachers and diplomats. Watching your cohort to go on to do all these amazing things is one of the best parts of graduating.

4.    What were some of the challenges you faced during your time at ANU and how did you overcome them? What advice would you give students striving to balance personal life commitments with the rigours of university study?

Law school is hard. Really hard. Add a part time job and activities on campus on top of that, and it suddenly can become overwhelming.

I was lucky to have a lovely group of friends from the ANU Law School and outstanding housemates. As well as being fantastic company, they always looked out for me when I was burnt out.

My honours thesis supervisor, Cameron Roles, went above and beyond to support me in my final year at the ANU, which was definitely the hardest year of my life. He’s still a mentor to me almost a decade after I first took his Labour Law class. The kindness and generosity of my teachers at the ANU College of Law, like Cam, made a big difference.

I have three pieces of advice that were passed on to me by other law students that I found helpful during my time at the ANU: