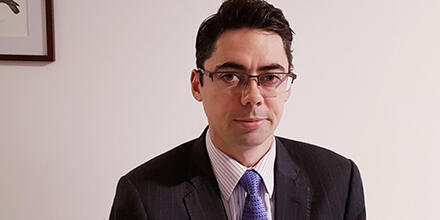 Liam Boyle has been praised by legal scholars for his essay examining the influence of the Australia Acts on public law.

An essay titled ‘The Significant Role of the Australia Acts in Australian Public Law’ written by Liam Boyle, a senior lawyer at the Australian Government Solicitor in Canberra, has won the prestigious 2020 Zines Prize for Excellence in Legal Research.

The prize is awarded each year by Federal Law Review, a flagship journal of The Australian National University (ANU) College of Law.

The panel of judges from Singapore, Auckland and Texas described Liam’s essay as “powerful, interesting, original and genuinely fascinating”.

In this Q&A, Liam discusses his professional background, the origins of his interest in constitutional law, and the significance of being awarded the 2020 Zines Prize.

1. Can you tell us a bit about your current role as senior lawyer with the Australian Government Solicitor?

I have worked in the Office of General Counsel in Canberra for over seven years. During that time, I have advised many Commonwealth agencies on a very broad range of issues concerning constitutional law and statutory interpretation. I have also worked on several constitutional cases in the High Court and other courts. Presently, I am outposted to the Commonwealth Treasury to assist their General Counsel.

2. What are the origins of your interest in constitutional law?

I grew up in England. Until fairly recently, constitutional law there was not something that featured as prominently as it does here. So when I started studying Australian constitutional law as an undergraduate at the University of Technology Sydney, the subject was completely novel to me. I was fascinated to learn more about the kind of constitutionalism we have in Australia and its effect on society.

3. What motivated you to explore the Australia Acts in your FLR essay?

The scholarship in Federal Law Review is consistently of the highest calibre, and I feel profoundly privileged to receive this prize.

5. A mentor during your Master of Laws studies at the University of Cambridge was one of our own long-time academics, Emeritus Professor Peter Cane FBA, FASSA, FAAL. How did he shape your understanding and passion for law?

I was very fortunate to be supervised by Professor Cane, given his in-depth knowledge of public law and research methodology. Some of the ideas in the article were drawn from his book Controlling Administrative Power: An Historical Comparison, and so to have the opportunity to discuss these ideas with him was invaluable.