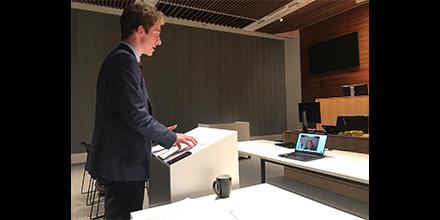 ANU student Javier Cross competes in the 2020 Herbert Smith Freehills International Computational Law e-Mooting Competition. The judge for this round was based in Hong Kong, while opposing counsel was an Australian team in New Zealand. Photo: Andrew Ray/ANU

(E-mooting is) probably going to reflect how law works after we’ve graduated.

It’s accessible. It’s environmentally friendly. And it’s resilient to travel restrictions, such as those imposed by the COVID-19 outbreak. Could the world’s first international e-mooting competition offer a glimpse of the future of legal education?

Both teams entered the decider undefeated following preliminary rounds against teams from around the world including the University of Edinburgh, National Law School of India University, Singapore Management University and University of Hong Kong.

This innovative competition examined the principles and significance of computational law including: artificial intelligence; automation of trust; data governance; privacy protection; accountability of algorithms; and blockchain.

Andrew and Javier, who were respondents in the grand final, were both full of praise for their “excellent” national law school counterparts.

“I had preferred to be on the side of the respondent until I saw how good Victoria University were on the appellant side. They were extremely solid. I couldn’t find anything wrong at all with their written submissions,” said Javier.

HSF partners and senior associates from the firm’s UK and Asia Pacific offices served as judges throughout the competition, giving students authentic access to technical and legal expertise.

“We are delighted to support the next generation of legal leaders in the digital age through this innovative competition,” said HSF Singapore partner, Natalie Curtis.

“The passion and professional skills displayed by all students, along with their sound knowledge of the principles and significance of computational law, stood out as highlights. We look forward to welcoming Andrew and Javier as interns, where they will have the opportunity to pursue their interest in law and technology with our expert practitioners.”

Mooting centred on the challenges of applying existing legal principles to novel technologies. This included whether a pseudonym can be defamed online and whether cryptocurrencies should be treated as property for the purposes of a knowing receipt claim in equity.

The fact that courts around the world were making decisions relevant to the subject matter each week facilitated students’ authentic, real-world learning. For example, Singapore's Court of Appeals ruled against digital currency exchange Quoine in a landmark case relating to a breach of contract when the platform unlawfully reversed seven trades.

“Obviously, these are really topical issues given the growth in online communication and the rise of cryptocurrencies and markets more broadly,” said Andrew.

“It meant we constantly had to adapt the way we were answering the question or developing our solution. That was the same for the other teams as well, particularly heading into the semi- and grand final. As teams, we all went back and re-prepared in light of the new material.”

E-mooting: the way of the future

One of the key highlights for students was the opportunity to learn from different styles of mooting around the world. The approaches to problems and standard of arguments were universally high and distinctive among each of the eight teams.

And while traditional mooting can be intimidating for some law students, presenting your argument in front of a laptop comes with its own unique challenges. The e-moot competition was conducted using video conferencing platform Zoom, with judges and mooters only appearing on screen when speaking.

“It's even more important to be engaging. Because you don’t have the judges in the room with you, it’s a lot harder to read how they are responding to what you’re saying,” said Andrew.

“It’s important to keep your energy up to maintain their focus on your argument.”

Well done to Emily and Tarran on reaching the Grand Final of the @HSFlegal #emootcompetition. We are very excited and looking forward to the Grand Final this evening!! #futurelawyers #futureoflaw https://t.co/EZuhCQosUf

The timing of the e-mooting competition also highlighted its advantages over traditional forms of mooting. On 12 March, the date of the e-moot grand final, organisers of the international Vis Moot in Vienna, Austria announced this year’s competition had been cancelled due to the COVID-19 outbreak.

For Andrew, the argument is simple: e-mooting is the way forward.

“It really is the future. It’s more accessible and more robust. If students can’t travel to compete at one central location, the way we traditionally run competitions makes no sense. Further to that, requiring competitors to fly to one location is prohibitively expensive,” he said.

“What (e-mooting competition director) Dr Pip Ryan and HSF have demonstrated in this competition is that there’s no reason you can’t run a robust competition where everyone moots from their home university and judging is done remotely. It especially makes sense for a mooting competition about law and technology,” he added.

There is also a trend of courts going online worldwide. In Australia, the NSW Supreme Court announced on 12 March it would send lawyers and clients to online courts in response to the COVID-19 spread.

“Conferences increasingly happen online and courts are moving online, so it’s already moving in that direction.”

In 2021, the HSF International Computational Law e-Mooting Competition will include teams from two new universities: The University of Oklahoma and Queen's University in Ontario, Canada.

More information will be available at the ANU College of Law website in September 2020.