Finding hope in uncertainty through mentorship 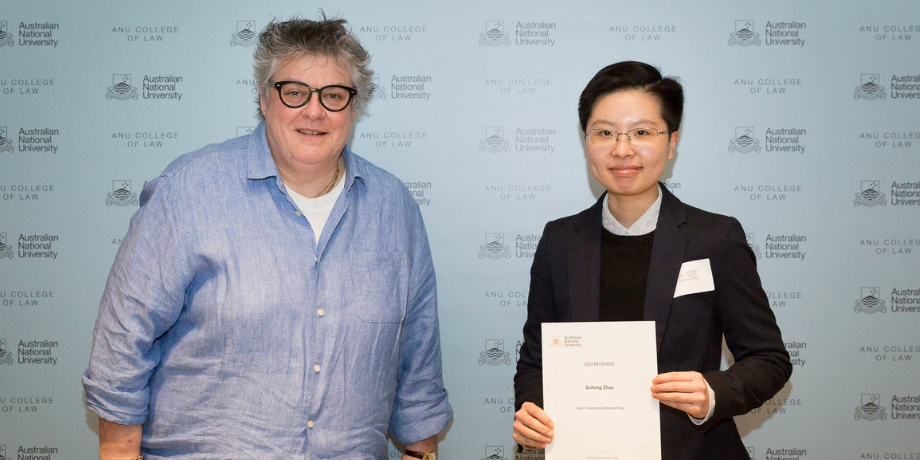 Guhong Zhou was awarded the 2022 Postgraduate Medal for Academic Excellence at her graduation ceremony on 13 July.

Sometimes all it takes is to reach out to people, especially in a supportive environment like the ANU College of Law

At the height of COVID-19 lockdowns when international travel was nearly impossible, Guhong Zhou was at a crossroads. Grounded in her home country of China, the Juris Doctor candidate felt a world away from The Australian National University (ANU) and the goals that motivated her to study postgraduate law.

It wasn’t the online readings or teaching model that bothered her so much as the uncertainty. Would she ever return to Canberra, a city that felt like ‘home’? Would her ‘dream’ job after graduation remain just a dream?

“When it (the pandemic) became a prolonged situation with no foreseeable end, I began to seriously doubt I could ever come back to Australia, let alone find employment here,” she said.

“Eventually, I learnt to stop ruminating on something I had no control over, and to continue focusing on my studies. I kept reminding myself that grades are the other, equally important, part of employability, not to mention ‘nerding’ out on purely academic concepts actually relieved me from constant anxiety.”

Earlier this month, Guhong achieved more goals than she could have imagined during that peak period of uncertainty: she had returned to Canberra; she had graduated with a number of prestigious academic awards to her name; and she had secured a job at a top-tier commercial law firm in Sydney.

Guhong’s law studies began seven years ago when she left her hometown in Northeast China to undertake her Bachelor of Laws in Beijing. Her keen interest in learning law from different perspectives led her to exchanges in both the United Kingdom and the Netherlands, before she set her sights on the ANU College of Law.

“Upon research, I found that ANU was a perfect match: the ANU College of Law is renowned for its strength in public law research and teaching, which caters for my public law interest; Canberra is small but esteemed, perfect for a quiet person like myself,” she said.

Having completed her undergraduate study in the quasi-civil law system in China, Guhong was keen to study further the precedent-based common law system.

The analytical, theoretical and practical aspects of law make it a discipline of endless fascination, she said.

Awarded the 2022 Postgraduate Medal for Academic Excellence at her graduation ceremony on 13 July, Guhong said the accolade sealed an important moment of self-belief and the value of not resting on one’s laurels.

“After three years, I am finally beginning to appreciate that I am not automatically ‘inferior’ in the understanding of a legal system simply by virtue of not having grown up around it,” said Guhong, who also claimed the 2020 and 2021 Dean’s International Student Prize and 2020 BC Meagher Prize for Constitutional Law.

“When I started, my goal was to pass all courses. When the results turned out to be better than that, I began to hold myself to a higher standard, and challenged myself to go further.”

Although she was well-adapted to studying online prior to the onset of COVID-19, Guhong admitted it was impossible not to feel anxious about what lay ahead. One of the ways she overcame these concerns was to find the silver lining of her remote learning situation.

“I allowed myself to pause and replay lecture recordings when I wanted a more detailed note. I also developed a schedule for each course to keep up with my readings, notes and assignments,” she said.

Towards her second year, Guhong voiced her concerns with Professor Ford about her limited opportunities to gain legal work experience in Australia. Professor Ford then took it upon himself to distribute Guhong’s CV and transcript to potential employers in Beijing.

The result? A two-month internship at the Beijing office of law firm Clifford Chance in their litigation and dispute resolution team. It was here that Guhong gained invaluable experience assisting in Hong Kong International Arbitration Centre proceedings and a Hong Kong High Court litigation matter.

For Guhong, the work was “especially exciting” and aligned with her deep interest in dispute resolution.

Now, she had a real-world opportunity to witness and contribute to the “great beauty” of dispute resolution.

“I had the opportunity to help draft letters in arbitral proceedings and review documents in preparation for discovery. It was immensely valuable for me to learn new concepts as well as develop and present my own arguments in the process,” she recalled.

Throughout Guhong’s law school journey, her educators have been a common source of inspiration. From compulsory courses to electives, public law to private law (and everything in between), each scholar and practitioner left an indelible mark on Guhong’s legal education.

“Associate Professors Kate Ogg, Matthew Zagor, Ryan Goss and Joshua Neoh taught me critical and reflective perspectives to various areas of legal studies, which propelled me to think deeper and broader about issues in law, society, and life. I also cherished every moment in guest lectures given by distinguished judicial officers, chiefly among them were former High Court justices William Gummow and Michael Kirby.”

However, Guhong unhesitatingly pinpoints Professor Ford as the most influential figure in helping her realise her academic and professional ambitions.

“I always felt obliged to work harder (in his class), just to match his level of diligence. Outside of the classroom, he went above and beyond to support me throughout my whole journey in pursuit of a career in Australia. I would not have had my achievements at ANU without him.

“No words can express my gratitude toward him,” she added.

Having recently graduated from the ANU, Guhong is commencing a position in the Sydney office of the top-tier commercial law firm King & Wood Mallesons (KWM) – an opportunity brought to her attention by Professor Ford.

Despite applying only to get a “flavour of the process”, Guhong was invited to interview and, a few days later, she was informed by a partner at the firm that she had been offered a graduate position; the culmination of years of hard work, this was the dream position for Guhong and her growing interest in working in commercial law.

When asked what advice she would offer students, particularly international students, Guhong recalled the advice given to her by Professor Jo Ford, quoting an idiom: ‘The squeaky wheel gets the oil’ – advice she readily pays forward.

“It is not easy to break the habit of thinking that your appeal for help is a nuisance,” she said.

“But it is entirely possible to actively seek out support while being polite and considerate. Even in what feels like an unsalvageable situation — such as missing the penultimate-year clerkship application for reasons outside of your control — there may be ways to work around it, like an ad hoc graduate pathway. Sometimes all it takes is to reach out to people, especially in a supportive environment like the ANU College of Law.”