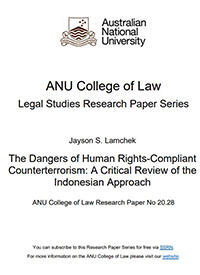 The Dangers of Human Rights-Compliant Counterterrorism: A Critical Review of the Indonesian Approach