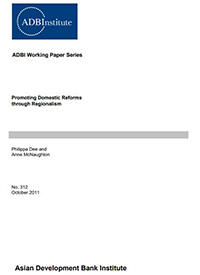 There is a strong presumption among economists that domestic reforms are promoted by regionalism. Yet strong empirical evidence for this proposition is lacking. This paper examines both the theoretical arguments and empirical evidence on this issue, drawing on the relevant economic, political, and legal literature. The authors argue that in general, the case for reciprocity in domestic reforms is weak. In the one case where a regional agreement appears to have promoted domestic reform - the European Union (EU) - the enforcement mechanisms used by the European Court of Justice played a significant role. But those mechanisms are not unique. Instead, the authors argue that the EU’s success was because domestic constituents were empowered to take action against uncompetitive regulation. Thus the EU promoted economic reform in sensitive, behind-the-border areas because it overcame the problem of loss of sovereignty by internalizing the political battle to domestic interests, and yet still provided a non-political frame of reference for the debate.