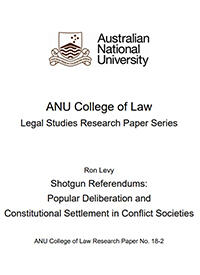 Referendums are now common in ‘conflict societies’ — societies where widespread armed engagement recently occurred, is occurring or is liable to occur. If well designed, a referendum might improve the prospects of achieving a conflict settlement. The referendum’s relative democratic legitimacy may also help to ensure against subsequent breach, once a settlement is reached. However, in practice the utility of referendums for conflict settlement has been inconsistent. Some past referendums faltered (e.g. a ‘no’ vote delayed settlement) as a result of neglect of careful institutional design. In particular, a number of past referendums proceeded as simple majoritarian exercises with little in the way of support for voters’ deliberation about issues at stake. By contrast, a handful of authors have described ‘Deliberative Referendums’ purpose-designed to generate more rational and informed referendum campaigns. Nearly all past work on Deliberative Referendums has focused on peaceful societies. Building on this past work, the present article introduces the term ‘Shotgun Referendum’ to refer to a Deliberative Referendum held under conditions of ongoing or apprehended violence. The article explains why such a referendum might incrementally improve the prospects for conflict settlement. It proposes the use of deliberative design features — some novel, others well known — and places these within a distinctive frame drawing on constitutional and deliberative theory. The article thus serves as a scoping study of the aspirations and boundaries of Shotgun Referendums. This can offer more careful direction when, as seems inevitable, in future more conflict societies hold referendums.