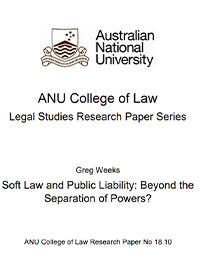 Soft Law and Public Liability: Beyond the Separation of Powers?

Soft law refers to domestic, non-legislative instruments which are designed to influence, modify or otherwise affect conduct. It relies for this result on the fact that people generally assume that soft law requires them to act and has immediate legal effect. Where this assumption is mistaken, individuals have a limited capacity to obtain remedies where public authorities fail to adhere to the terms of their published soft law. This paper examines reliance on soft law and considers a selection of the diverse forms in which it appears. It considers which remedies are available where an individual suffers loss as a result of relying on soft law and asks whether and how the separation of powers doctrine can be updated to attach legal significance to the proliferation of soft law. Soft law is a topic about which little has been written. Given its importance as a regulatory tool, a fuller analysis of its place within the separation of powers model is both timely and original.