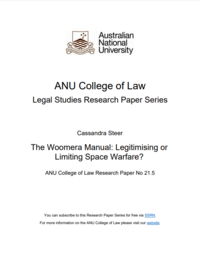 Military activities in outer space are governed by international law, and the applicability of the law on use of force and law of armed conflict to space is therefore uncontroversial. However, because space has many unique characteristics when compared with other environments, it is not always clear exactly how certain aspects of these bodies of law will apply. For example, at what point does an activity in space amount to a “threat to international peace and security”, or an “armed attack”, both of which would justify some form of forceful response? Where there is ambiguity, there is tension, which can lead to escalation and the risk of space warfare, or of terrestrial warfare in response to a space activity. In an attempt to provide some clarity, the Woomera Manual on the International Law of Military Space Activities is being developed by a group of independent experts from around the world. This chapter tackles the question whether such a Manual has the effect of legitimising space warfare, or rather a restraining effect on the risk of space warfare, and on the impacts if it were to take place.