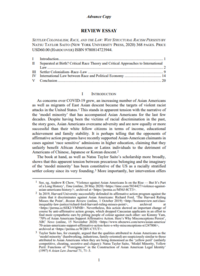 As concerns over COVID-19 grew, an increasing number of Asian Americans as well as migrants of East Asian descent became the targets of violent racist attacks in the United States. This stands in apparent tension with the narrative of the ‘model minority’ that has accompanied Asian Americans for the last few decades. Despite having been the victims of racial discrimination in the past, the story goes, Asian Americans overcame adversity and are now equally or more successful than their white fellow citizens in terms of income, educational achievement and family stability. It is perhaps telling that the opponents of affirmative action programs have recently supported Asian-American claimants in cases against ‘race sensitive’ admissions in higher education, claiming that they unfairly benefit African Americans or Latinx individuals to the detriment of Americans of Chinese, Japanese or Korean descent.