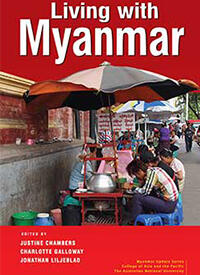 Since 2011 Myanmar has experienced many changes to its social, political and economic landscape. The formation of a new government in 2016, led by the National League for Democracy, was a crucially important milestone in the country’s transition to a more inclusive form of governance. And yet, for many people everyday struggles remain unchanged, and have often worsened in recent years. Key economic, social and political reforms are stalled, conflict persists and longstanding issues of citizenship and belonging remain.

The wide-ranging, myriad and multiple challenges of Living with Myanmar is the subject of this volume. Following the Myanmar Update series tradition, each of the authors offers a different perspective on the sociopolitical and economic mutations occurring in the country and the challenges that still remain. The book is divided into six sections and covers critical issues ranging from gender equality and identity politics, to agrarian reform and the representative role of parliament. Collectively, these voices raise key questions concerning the institutional legacies of military rule and their ongoing role in subverting the country’s reform process. However, they also offer insights into the creative and productive ways that Myanmar’s activists, civil society, parliamentarians, bureaucrats and everyday people attempt to engage with and reform those legacies.