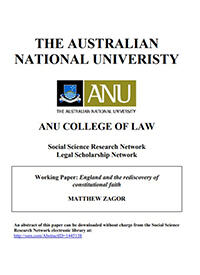 England and the Rediscovery of Constitutional Faith

England is currently experiencing a widely recognised constitutional renaissance, with traditional English ‘liberties’ at its core: historic rights and liberty-affirming documents of the past are cited by counsel and judge alike, the Prime Minister waxes lyrical about constitutional values which define the British nation, scholars call for the revival of a purported rights-centric common law constitution, and a new breed of media-star historians are rediscovering English liberties in political institutions and re-imagined constitutional moments. Even the mythology of Magna Carta is resurfacing in the popular imagination, the date of its signing selected by public poll as ‘the best date to celebrate Britishness’.

The rhetoric contrasts with the dominant popular trope for much of the twentieth century, which portrayed the English constitution as essentially clever politics. Today’s constitutional veneration, however, has a long and complex history. This paper charts the variety of constitutional veneration that arose in the post-reformation period, as well as its decline, and contemporary revival. Starting with an overview of the seventeenth century, it charts the emergence of a constitutional language arising out of the rich theological and philosophical tradition of the age, and the persuasive use by the principal judicial figures of the day of new forms of historiography, traditional natural law philosophy, and emerging ethnic nationalism. Underpinned by contended notions of liberty and religiosity, this potent mix ensured that the newly minted English constitution enjoyed a quasi-religious status, embracing divinely ordained values and institutional arrangements that at once defined what it was to be both English and Protestant, and therefore was worthy of veneration. The decline of this constitutional model in the 19th and 20th century is then considered against the backdrop of empiricism, utilitarianism, nationalism and the victory of a political understanding of the constitutional model. The purported disappearance of the ‘legal’ constitution in this period, however, was never to be consolidated, nor were the contradictions inherent in the new ‘sovereignist’ model reconcilable with the explosion of rights jurisprudence in the latter part of the twentieth century. The article therefore concludes with a brief overview of the re-emergence of the language of constitutional faith in the late twentieth and early twenty-first century, and the renewed reliance on this rhetoric of constitutional veneration by the judicial branch of government in an attempt to influence the development of a normative English constitutional and national identity.