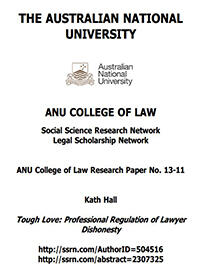 Regulating lawyer dishonesty is a key focus of professional misconduct cases in most jurisdictions. And rightly so. In any legal system aimed at the just resolution of disputes between citizens, it is essential that lawyers’ words and behaviour can be relied upon by the courts, clients, other lawyers and the public. Yet research into seven years of disciplinary cases in New South Wales (NSW), Australia suggests that only a narrow range of dishonest conduct is actioned, often with harsh results for the practitioners involved. Research outlined in this article shows that 65% of the cases decided in this jurisdiction between 2004-2010 involved findings of practitioner dishonesty, 80% of the practitioners involved in those cases were disbarred and 89% of the total number of lawyers disciplined worked as solo and small firm practitioners.

The Australian research reported in this article may be emblematic of similar issues that occur in the regulation of lawyer dishonesty in both the United States and Canada. It is therefore argued that, for disciplinary cases to be seen as legitimate and just, it is important for the profession and regulators to consider the way dishonesty is being characterized and the harshness of the penalties imposed. When these questions are asked in the Australian context, the research suggests there is a tendency to treat small and sole firm practitioners particularly harshly even where small instances of dishonesty are involved. In addition, the dominant regulatory approach is still to link dishonesty with poor character, a connection that is unsupported by empirical research in psychology. Finally, there appears to be limited appreciation by regulatory authorities of the links between dishonesty, stress and psychological conditions.