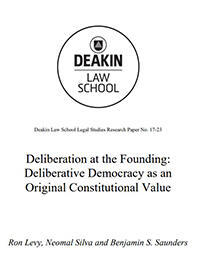 Deliberation at the Founding: Deliberative Democracy as an Original Constitutional Value