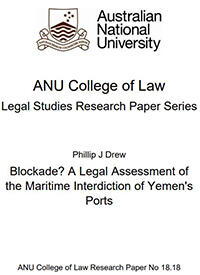 Blockade? A Legal Assessment of the Maritime Interdiction of Yemen’s Ports

In January 2015, the government of Abdrabbuh Mansour Hadi was ousted from power by Houthi rebels based in the northern highlands of Yemen. Initially forced to flee the country, Hadi soon returned, establishing a new government in the southern city of Aden. His return marked the commencement of the latest phase of Yemen’s perpetual civil war.

In what has often been referred to as the ‘Saudi-led blockade’, a coalition naval force, made up primarily of vessels from Gulf Cooperation Council states, has been enforcing a closure of Yemen’s waters and most of its ports. Yemen requires food imports to feed its population, and fuel imports to generate the electricity that it needs to keep its water plants operating. As a result of the naval interdiction operations, the civilian population of Yemen is in crisis. Approximately 20 million people require humanitarian assistance, and the country continues to struggle under the largest cholera epidemic in history.

This paper examines the legal bases for the current interdiction operations, both from the perspective of the law of naval warfare and the law of the sea. Finally it assesses the role that Security Council resolutions have played in the continuation of the ongoing humanitarian crisis and the role that the Security Council can play in supporting the delivery of humanitarian assistance to those in need.