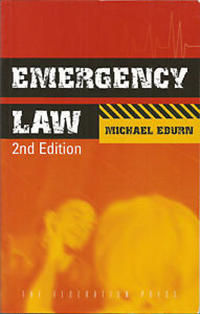 The latest edition of this book has been updated to incorporate the latest developments in case law and legislation. To cover all of Australia, the work has been expanded to include the law in Australia’s smallest self-governing territory, Norfolk Island. For first aiders and paramedics, the discussion on the legal powers granted to paramedics when treating the mentally ill; the patient’s right to refuse treatment and the use of professional training when responding as a volunteer or good Samaritan has been revised and expanded. The chapter on responding to large scale disasters has been significantly re-written to include a discussion on the Australian Inter-Agency Incident Management System and the relationship between AIIMS and state counter disaster or emergency management legislation. Included is a detailed discussion on when control of emergency response can be transferred from the lead agency to a central coordinating committee or to the police. The chapter on legal liability reports on the outcome of litigation arising from the catastrophic bushfires in 2001 (Sydney) and 2003 (Canberra).