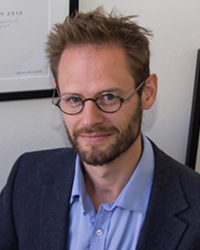 Dr Bateman leads multi-jurisdictional projects on the legal regulation of public and private finance, with a special focus on central banking, sovereign debt markets, national budget formulation and sustainable investing. His recent engagements with central banks and financial regulators include:

Dr Bateman also leads research projects on the regulation of artificial intelligence, and is currently spearheading a major project on the formulation of model legal frameworks to govern artificial intelligence in the public sector. He also collaborates with computer science experts in designing ethical and lawful algorithmic decision systems. His law/tech collaboration partners include:

Legal practitioner (admitted to practice in NSW and Federal Courts)

This online event is the first in the 2021 Menzies Cyber Law Series, featuring three prominent speakers on human/machine intelligence, global health law, cyber warfare, and the future of humanity.

Join us to help celebrate the recent works of Dr Will Bateman and Dr Ntina Tzouvala for the first CIPL Book Launch event of 2021.

Join a panel of leading interdisciplinary experts as they explore the complex legal and ethical challenges AI and automated decision-making present to industry, government and the legal profession.

Indigenous Australians and the Constitution

In this seminar, join Dr Will Bateman and three experts in Commonwealth Constitutional Law as they will discuss the High Court's past and present engagements with Indigenous Australians.

His research has been awarded numerous prizes, including the 2020 Yorke Prize by the University of Cambridge for his work on public finance and constitutionalism.

Dr Bateman is working on a broad-range of interdisciplinary projects with international and domestic scholars.

Dr Bateman is working on a number of projects concerning the legal regulation of public and private finance, with a special focus on sovereign debt markets, central banking, national budget formulation and banking regulation.

Dr Bateman has recently concluded a major research project on the constitutional dimensions of public finance in the UK, Canada, Australia and elsewhere in the Anglophone Commonwealth. His book, Public Finance and Parliamentary Constitutionalism (Cambridge University Press, UK) presents the major findings of that project.

Dr Bateman is also a Team Member of the multi-disciplinary project "FA Mann and his contribution to English, German, European, and International Law" funded by the German Research Foundation.

Over 2020-21, he is co-leading (with Associate Professor Julia Powles, University of Western Australia) the first major project to formulate model legal frameworks for the regulation of artificial intelligence in the public sector. The project is funded by the global-philanthropy and research funding body, The Minderoo Foundation.

Dr Bateman has been retained as an independent expert by government agencies on issues relating to the legal regulation of automation and artificial intelligence.

Dr Bateman has also provided legal and policy advice on complex administrative and constitutional law matters, as well as issues concerning public finance and the operations of central banks.

'Procedural Due Process Under The Australian Constitution' (2009) 31 Sydney Law Review 411.

Will is keen to supervise in his areas of research interest.

Will is keen to supervise in his areas of research interest.

Chapter III of the Constitution, Federal Jurisdiction and Dialogue Charters of Human Rights