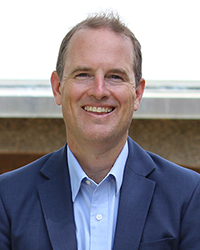 Jeremy Farrall is a professor of law at the ANU College of Law.

Professor Farrall has worked for the United Nations in a range of capacities, serving as a Political Affairs Officer for the UN Security Council at UN Headquarters in New York (2001-2004) and for the UN Mission in Liberia (2004-2006). He was also a UN Facilitator for the UN Secretary-General's Good Offices team that mediated peace talks in Cyprus (2004, 2008).

He has been Chief Investigator on two major Australian Research Council Grants. His ARC Discovery Project 'Leveraging Power and Influence on the UN Security Council' (2015-2020, with Chris Michaelsen, Jochen Prantl and Jeni Whalan) is a cross-institutional, cross-disciplinary collaboration between the University of New South Wales and the ANU. His ARC Linkage Project 'Strengthening the Rule of Law through the United Nations Security Council' (2011-2014, with Hilary Charlesworth) was a collaboration between the ANU Centre for International Governance and Justice and the Australian Government's Australian Civil-Military Centre.

The pandemic paradox in international law

This event will examine the contours and consequences COVID-19 had on the areas of patriotism, borders and equality and discuss how international law and legal institutions can navigate populist-driven threats.

Celebrating the launch of a new book by Professor Desmond Manderson

Jeremy Farrall has a global reputation as a leading scholar of the United Nations (UN) Security Council (UNSC), its use of peacekeeping and sanctions to maintain international peace and security, and the impact of its decision-making on the rule of law. In his scholarship Professor Farrall draws on high-level personal practical experience with the United Nations, including in the areas of peacemaking, peacekeeping and peacebuilding. His research publications are high-quality and high-impact, on both the academic and policy-making fronts. He has an excellent Australian Research Council (ARC) grant track-record.

Influencing the UN Human Rights Council: An Australia-Asia-Pacific Agenda: This project, pitched to the Australian Research Council under the Discovery Projects grant scheme, brings together a multi-institutional, interdisciplinary team to examine how Australia and other countries from the Asia-Pacific region have exercised influence in their recent stints as members of the UN Human RIghts Council (with Associate Professor Amy Maguire, University of Newcastle, Associate Professor Susan Harris Rimmer, Griffith University, & Dr. Fiona McGaughey, University of Western Australia.

1. 'Leveraging Power and Influence on the UN Security Council: The role of Elected Members'

Project Summary: This project examines the fundamental problem of how elected members on the Security Council can influence Council decision-making and norm development. Assembling a research team of international lawyers and political scientists, the project provides a rigorous, multi-disciplinary evaluation of why and when non-permanent Council members have succeeded in impacting the Council's decision-making process, despite lacking the veto power available to the five permanent members. Drawing on recent experiences of elected members, including Australia, the project advances evidence-based and empirically-grounded policy proposals designed to increase the capacity of elected members to exercise power and influence over the Council's agenda and policy.

2. Strengthening the Rule of Law through the UN Security Council

Partners: ANU Centre for International Governance and Justice and the Australian Civil-Military Centre.

Project Summary: Since the end of the Cold War, the UN Security Council has emphasised its commitment to the rule of law, yet it has not always lived up to this promise. This project will examine the relationship between the Security Council and the rule of law, particularly in the areas of peacebuilding, sanctions and the use of force. It will identify new approaches to enhance respect for the rule of law, including through the effective coordination of civilian and military operations, as well as the ways in which Australia can best promote such approaches at the international level. It will produce a series of scholarly publications and practical policy guidelines for international institutions.

3. Building Democracy and Justice after Conflict

Project Summary: Weak governance is a cause of terrorism. Australia is increasingly involved in nation-building projects, both in its region and internationally. This project will build Australia's expertise in the ways that international law can promote democracy and justice after conflict. It will develop guidelines for states and organisations involved in peace and nation-building. The project will thus contribute to safeguarding Australia by increasing Australia's capacity to engage with, and interpret itself to, its neighbours and the broader international community, as well as by tackling the threat of terrorism.

Farrall, J., (2016), ‘The UN Security Council as regulator and subject of the rule of law: conflict or confluence of interest?’ (with M. Loiselle) in J. Farrall & H. Charlesworth (eds.), Strengthening the Rule of Law through the UN Security Council (Oxon and New York: Routledge, 2016), 287-298.

Dr. Farrall's research seeks to shape international policy and law reform. He frames his research findings in a policy-relevant and accessible manner, so that they can shape evidence-based policy.

His first book,United Nations Sanctions and the Rule of Law (Cambridge University Press, 2007) advanced a pragmatic model of the rule of law, comprising five basic decision-making principles designed to increase the United Nations sanctions system’s capacity to reinforce the rule of law. The book culminates in a set of policy recommendations targeting key policy makers and analysts in the field of UN sanctions.

As part of the ARC Linkage Project on ‘Strengthening the Rule of Law through the UN Security Council’, Dr. Farrall drafted a series of policy proposals designed to enhance the Security Council’s capacity to strengthen the rule of law when it employs three critical tools for the maintenance of international peace and security, namely peace operations, sanctions and force.

The policy proposals were launched by Australia’s Permanent Representative to the United Nations, H.E. Gillian Bird, at UN Headquarters on 11 March 2016. They were then discussed and endorsed on the same day by a hundred representatives of the UN diplomatic international legal community, in a meeting that took place in UN Conference Room 7 under the standing UN General Assembly item ‘UN Member States Dialogue on the Rule of Law at the International Level’. The proposals were then published by the UN Security Council an official UN Security Council document: UN doc. S/2016/397.

The Pandemic Paradox in International Law