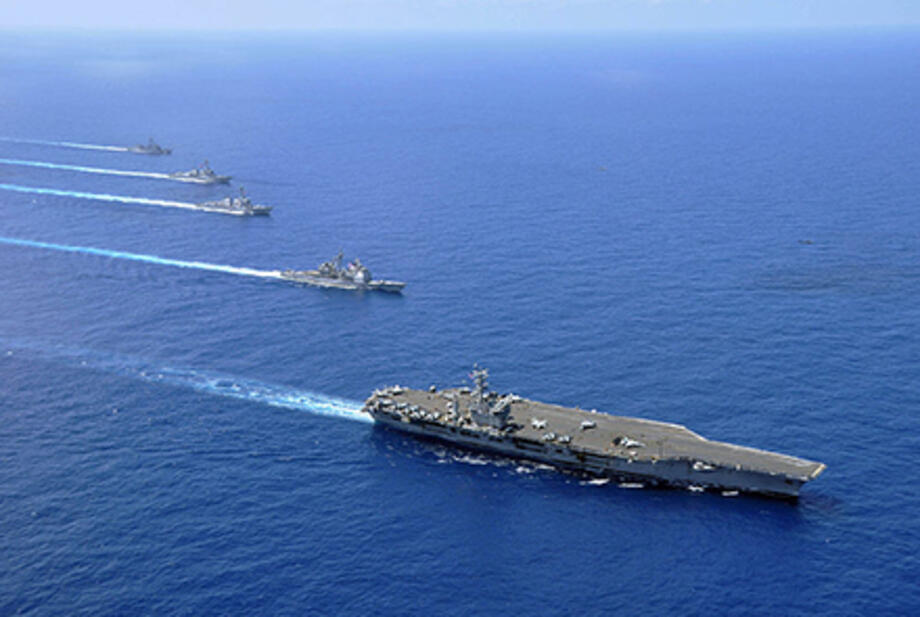 US Navy warships in formation in the South China Sea. Photo courtesy US Navy.

As tensions rise again in the South China Sea, actions – and not just words – are required if Australia is to protect its strategic interests, and ensure that international legal norms are not ignored.

Rather than being a case of blindly following the US without question, Australia’s response to issues in the South China Sea is of critical importance for contemporary maritime developments in our region, and raises important legal and operational considerations.

The first of these, the legal aspect, is that the Permanent Court of Arbitration (PCA) – a respected international body where states can attempt to resolve issues without having to use international courts – has ruled that it does have jurisdiction to hear a case brought by the Philippines against China.

The case ‘to resolve a dispute over the Parties’ respective “maritime entitlements” and the lawfulness of Chinese activities in the South China Sea,’ signals the PCA might make some fairly precise statements and conclusions about the legal nature of some of the maritime features in the South China Sea around which current claims hinge.

If the PCA does this, and its conclusions are legally sound, sensible and supportable, Australia will need to closely consider their implication. If Australia believes the PCA has got it mostly right, then a good deal of the claimed fuzziness regarding whose South China Sea claims comply with the law –and whose do not – will be removed.

If the PCA concludes that some aspects of this matrix of claims are legally spurious or unsupportable, then it will no longer be an option to sidestep the sharper question of ‘blame’ for on-water conduct.

Our capacity to use the uncertain validity of any particular claim as a basis for not ‘calling out’ breaches of the rules will be markedly reduced. Indeed, shying away from recognising legal conclusions will look weak for a country that routinely declares compliance with the international rules-based order is fundamental to global peace and security.

The second consideration – an operational one – is that at least three Royal Australian Navy warships have recently been in that area, and at various times during their deployments, worked with ships from the Chinese People’s Liberation Army – Navy, the Japanese Maritime Self Defense Force, the South Korean Navy, the Philippines Navy, and the Singaporean Navy.

While not unusual for Australian warships to conduct exercises with those from countries where there is disagreement over some issues -  including the validity of maritime claims – the high sensitivity of China to any statement which contradicts the Chinese version of the South China Sea situation means it may prove difficult to separate the issues.

It will require a good deal of naval diplomacy and relationship building with China to create an environment where meaningful exercises can still be undertaken, and the ‘strategic’ issues can be placed to the side when operating warships in close proximity and in pursuit of a common mission at sea.

The challenge is how to manage a vital Navy-to-Navy relationship with a highly sensitive, evolving superpower which has arguably made - and which the PCA might soon confirm – several legally unsupportable claims in the South China Sea.

The solution does not lie in simply joining the US in conducting operations in that area. Rather, Australia needs to signal - by words and actions – its dedication to maintaining the international rules-based order because it is in Australia’s strategic interest to do so.

Sometimes, when things that threaten international order happen on the other side of the world, it is acceptable to signal Australia’s position by words alone, reserving scarce resources for events closer to home.

But when a threat to the rules-based international order is in our front yard, there is a responsibility to speak and to act. The discussion that needs to happen is when Australia should not only speak in support of any decision of the PCA, but act on it if necessary.

At times, these discussions will be uncomfortable, but given the vital relationship we must maintain with China, and our commitment to protecting the international rules-based order, Australia will need to be politely, but relentlessly, on message.

The urgent question is what that message will be and how it will be delivered.