Will China accept international law in the South China Sea? 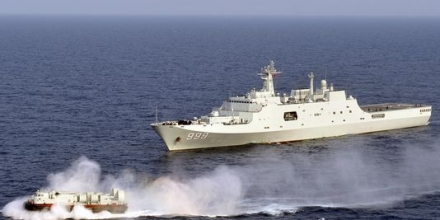 The ongoing disputes between the Philippines and China in the South China Sea are about to reach a critical point. In January 2013 the Philippines activated procedures under Article 287 and Annex VII of the 1982 UN Convention on the Law of the Sea (UNCLOS) over a dispute about the validity of China’s ‘nine-dash line’ in the South China Sea. The Philippines contests the validity of this line and any attempts by China to assert sovereignty or sovereign rights over islands and other maritime features found within this area.

But will China accept the Annex VII Arbitral Tribunal’s jurisdiction to hear and determine the Philippines’ claim?

In 2006 China made a Declaration under Article 298 of UNCLOS indicating that it did not accept certain compulsory dispute resolution procedures under Part XV of the convention, including disputes with respect to ‘historic bays or titles’. This raises issues as to whether elements of China’s disputes with the Philippines in the South China Sea would fall within this exception. It is currently unclear precisely what the historic titles that China asserts in the South China Sea are.

On 19 February 2013 China also indicated that it would not participate in the Annex VII Arbitral Tribunal proceedings. China further reiterated its position on 1 August 2013 when it submitted a note verbale to the Permanent Court of Arbitration at The Hague, which is the registry for the proceedings, indicating that ‘it does not accept the arbitration initiated by the Philippines’ and that it will not be participating in the proceedings.

The Philippines filed its written pleadings via a memorial on 30 March 2014. On 3 June 2014 the Arbitral Tribunal fixed 15 December 2014 as the date for China to submit its counter-memorial in response to the Philippines’ memorial. To date, as China has formally indicated that it will not participate in the proceedings, all current indicators are that China will not submit its counter-memorial on 15 December.

Still, Annex VII of UNCLOS contains procedures whereby if one of the parties chooses to not participate in the proceedings, an Arbitral Tribunal can be constituted and hear the application even in the case of a default appearance. In that scenario, the Tribunal would need to determine that it possesses jurisdiction over the dispute and that the Philippines claim is ‘well founded’ in both fact and law.

Yet, while 15 December 2014 will be a critical date in the proceedings, it does not represent a ‘last chance’ for China to engage in the proceedings. Additional procedures will take place. Given the issues raised by the Philippines application, China’s Article 298 Declaration and the real potential of China’s default of appearance, the Tribunal may request that the Philippines make additional submissions on matters that go to jurisdiction. The Tribunal may also seek further written clarification from the Philippines and request additional submissions with respect to matters arising from its 30 March Memorial.

These additional procedures may take some time and oral proceedings would certainly not occur until mid 2015. During this time China would always have the option of agreeing to participate in the proceedings. Even in the case that China did not make an appearance, consistent with Article 9 of Annex VII of UNCLOS, the Tribunal will need to rule that the claim is within its jurisdiction and well founded in ‘fact and law’. If the Tribunal did so rule, the Philippine’s claim could fall at that hurdle and the proceedings would be brought to an end.

China’s President Xi Jinping has recently called for greater emphasis on cooperation and diplomacy in China’s foreign policy. This position aligns with a more moderate position on China–Philippines bilateral relations advanced during the November APEC meeting in Beijing. If the Philippines and China remain unable to settle their South China Sea disputes in the short term, there is every likelihood that the Philippines will keep the Arbitration on track.

This will in turn throw the spotlight upon China. Is it prepared to engage in formal dispute resolution processes? Acceptance by China of the Annex VII UNCLOS arbitration process will result in a loss of control as the dispute is handed over to third parties and, as with all forms of international litigation, there is the risk of a Chinese loss.

On the other hand, by continually refusing to engage in the process, China runs the risk of appearing unwilling to be part of the global oceans order. China has been placing increasing significance on the global order of the oceans, including navigational freedoms. China also actively negotiated the global order of oceans during the 1970s and Beijing accepted when it became an original party to UNCLOS in 1996. Beijing will need to carefully assess how it ultimately deals with its South China Sea dispute with the Philippines and what the broader implications of its decision will be.

Donald R. Rothwell is Professor of International Law and Deputy Dean at the ANU College of Law, the Australian National University. This article originally appeared in the East Asia Forum