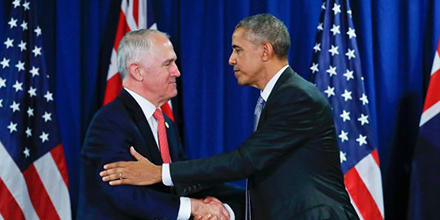 Malcolm Turnbull returned from the APEC Leaders' summit in Peru all fired up about counter-terrorism, and that was the theme of his national security statement to the House on Wednesday.

Terrorism is often included as a safe topic at international talks because just about everyone can contribute without having major disagreements. However, there are many types of terrorism and it is frequently the case that separatist terrorism – which is usually down to central government mismanagement – gets included in the mix, particularly if there is any possibility of the regime concerned connecting it to Islamic State or al-Qaeda. In East Asia, terrorism in China, the Philippines and Thailand is mostly of the mismanaged separatist kind.

The Prime Minister noted that Australia has increased counter-terrorism spending by $1.5 billion since September 2014, and there is no doubt that within Australia the security agencies have done a good job of protecting our security.

Our regional efforts have been less convincing. For example, the Australian Bomb Data Centre was a key part of the regional network of bomb data centres – most of which the ABDC had been instrumental in setting up post-Bali 2002. However in 2015 the Australian Federal Police, which hosted the ABDC, quietly closed it down and moved the function into its forensics area.

I was told at the 2016 International Association of Bomb Technicians and Investigators Conference in Canada in July that the level of regional support from Australia has declined significantly (most regional terrorism incidents are bombings). In addition, the ABDC's well-respected annual "bomb" conference that brought together international experts will not run this year for the first time since 1996, and may be permanently discontinued.

It is certainly true that we face a new type of threat from supporters of IS, but perhaps not as dangerous as the threat we faced from al-Qaeda – which had always been more interested in causing mass casualties. IS generally prefers simple operations using knives and vehicles because it thinks that the newsworthiness of the killing is more significant than the number of casualties.

The brutal killing and attempted beheading of Fusilier Lee Rigby in London in May 2013 is more its style. However, where there are combat-hardened IS returnees from Syria and/or availability of automatic weapons, IS attacks can be much more deadly, as in Paris or Orlando. Firearms attacks with automatic weapons are far less likely in Australia.

We do however need to be wary in the long-term of a resurgence of al-Qaeda, which has been quietly rebuilding capability while the West has been fixated on IS.

Turnbull also mentioned the potential threat to Australians overseas. This is certainly an ongoing security concern. The Sinai affiliate of IS was responsible for bombing a Russian Metrojet passenger aircraft in October 2015 with the loss of 224 lives. It is not beyond the bounds of possibility that a plane carrying Australian tourists out of somewhere with inadequate airport security – like Bali, could be similarly targeted. We could probably be doing more to help Indonesia improve its airport security.

US President Barack Obama is still travelling overseas and assuring all and sundry of the US's enduring security commitments to its friends, but the reality is that he is a lame-duck president trying to protect his legacy and American interests. We will not really know where the US stands on national security until Donald Trump is in office. Trump is talking about stepping up US defence expenditure – already at 4.35 per cent of GDP. While we have always been a willing coalition ally, he may look at Australia less sympathetically in terms of ANZUS and pulling our own weight when he learns we are spending only 1.71 per cent of our GDP on defence.