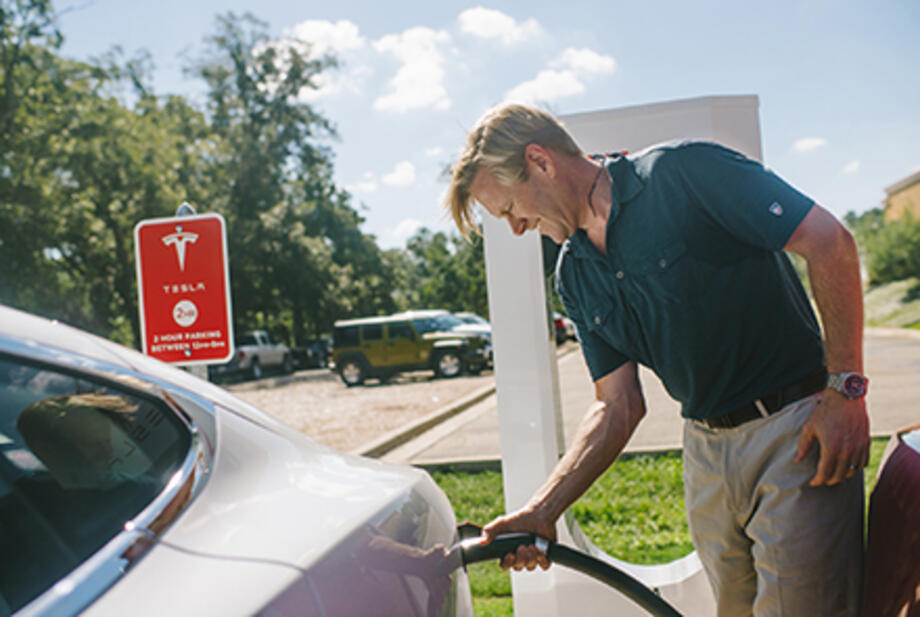 As part of the press conference, the futurist and theoretical physicist Dr Michio Kaku discussed the possibilities of the hydrogen future for the automobile industry.

Kaku observed: ‘Usually hydrogen cars are priced at hundreds of thousands of dollars, way beyond the pocketbook of the average person.’ He said: ‘But this car, we’re talking about the neighborhood of $50,000.’ Kaku emphasized: As mass production, competition, and economies of scale begin to kick in — and as governments begin to subsidize the creation of refueling stations — you’re going to see that cost drop even further.’

Bob Carter, the Senior President of Automative Operations at Toyota USA, deployed the rhetoric of sharing in his speech: ‘At Toyota, we believe that when good ideas are shared, great things can happen.’

He stressed: ‘The first generation hydrogen fuel cell vehicles, launched between 2015 and 2020, will be critical, requiring a concerted effort and unconventional collaboration between automakers, government regulators, academia and energy providers’. Carter maintained: ‘By eliminating traditional corporate boundaries, we can speed the development of new technologies and move into the future of mobility more quickly, effectively and economically.’

The announcement is striking – given that Toyota has previously had some unhappy experiences in respect of patent litigation. In relation to the Toyota Prius, Toyota was embroiled in patent litigation with Paice. After initially accusing Paice of being a predatory patent troll, Toyota was unable to defeat Paice in long-running litigation over patent validity and infringement. In the end, Toyota settled with Paice, agreeing to pay royalties for the use of its patents related to hybrid cars.

Toyota’s announcement echoes the 2014 announcement by Telsa Motors in respect of open licensing of electric cars. In June 2014, Elon Musk dramatically announced on his blog that ‘all our patents belong to you’. The chief executive officer of Tesla Motors emphasized that the company was adopting an open source philosophy in respect of intellectual property:

Yesterday, there was a wall of Tesla patents in the lobby of our Palo Alto headquarters. That is no longer the case. They have been removed, in the spirit of the open source movement, for the advancement of electric vehicle technology. Tesla Motors was created to accelerate the advent of sustainable transport. If we clear a path to the creation of compelling electric vehicles, but then lay intellectual property landmines behind us to inhibit others, we are acting in a manner contrary to that goal. Tesla will not initiate patent lawsuits against anyone who, in good faith, wants to use our technology.

While this announcement lacked finer detail as to the exact nature of the open licensing, Elon Musk and Tesla Motors were able to generate much popular interest and acclaim, with the bolder announcement. Through its response at CES2015, Toyota perceives Tesla Motors as a genuine threat and competitor in respect of the development of green vehicles and transportation. The car manufacturer is perhaps more worried about Tesla Motors’ electric vehicles than its traditional Detroit Motown rivals. Toyota is keen to ensure that the Toyota Prius and the Toyota Mirai are not left behind by Tesla Motors’ Open Source Revolution.

Despite the grand rhetoric at CES2015, Toyota’s announcement falls short of truly open innovation. The company emphasized that licensing will be limited to automakers, fuel cell parts suppliers and energy companies who establish and operate fuelling stations. Toyota will consider requests from parts suppliers and companies outside of the transportation sector on a case by case basis. Toyota has indicated that ‘Patents related to fuel cell vehicles will be available for royalty-free licenses until the end of 2020’. Moreover, ‘Patents for hydrogen production and supply will remain open for an unlimited duration’. There also seems to be a quid pro quo: ‘As part of licensing agreements, Toyota will request, but will not require, that other companies share their fuel cell-related patents with Toyota for similar royalty-free use.’ It is significant that Toyota retains the ownership of the key patents, which have been offered in the deal.

The announcement by Toyota marks a significant shift in the company’s approach to the management and exploitation of intellectual property. The decision shows an engagement with intellectual property, the collaborative common, and the sharing economy. In his speech, Bob Carter noted: ‘Today’s announcement on patents has less to do with the hydrogen fuel cell car than it does about the cultural growth of a hydrogen society.’ He observed: ‘Traditionally intellectual properties are fiercely guarded because they have great monetary value.’ Carter stressed: ‘But with… our patent announcement today it's obvious that there can be a higher societal value in openly sharing IP.’ He emphasized: ‘By eliminating traditional corporate boundaries we can speed the metabolism of R&D.’ Carter concluded ‘It is indeed a turning point in automotive history.’ He closed his speech by citing, President Abraham Lincoln: ‘The best way to predict the future … is to create it.’

There has been a number of early experimentations with open innovation in respect of clean technologies. Notably, there were early collaborative endeavours, such as the Eco-Patent Commons, the Green XChange, and open source projects focused on clean technologies. At an international level, the UNFCCC Climate Technology Centre and Network (CTCN) and WIPO GREEN have since been established to promote the diffusion and dissemination of green technologies. Toyota and Tesla Motors have shown that individual companies are willing to engage in patent-sharing in order to boost the research, development, and adoption of emerging technologies.

It remains to be seen whether such an approach to sharing to intellectual property in respect of green vehicles will be taken up in other fields of renewable energy and clean technologies – particularly with the Paris 2015 conference on climate change on the horizon this year.

Dr Matthew Rimmer is an Australian Research Council Future Fellow and Associate Professor at the ANU College of Law. This article originally appeared in Crikey.