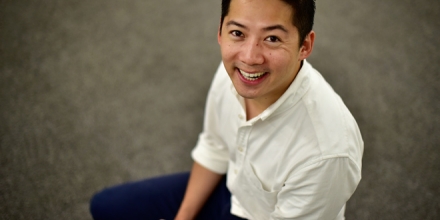 From advising the Australian Permanent Mission to the United Nations on human rights to helping the World Economic Forum support young change-makers across the world, ANU College of Law alumnus, Alan Wu, has achieved more in the five years since graduating than many do in a lifetime.

Announced as the Young Alumnus of the Year at the ANU 2016 Alumni Awards for his efforts to champion the voice of youth, Alan has a simple message if Australia – and the diverse communities within it – is to achieve a truly inclusive and tolerant society.

“For too many Australians, the promise of opportunity remains beyond their reach. There is so much more to do because no-one should have to live in the shadow of discrimination and inequality - we need to topple the barriers of bigotry.

“Fundamentally, we all want the same, basic things: to feel safe, to belong and to find somebody to love, to have a say in the course of our lives, and to be hopeful for the future.

“We can only meet the challenges of our time together – part of being alive in this world is recognising the depth of humanity in those around us.”

The son of migrants from China and Africa, Alan said much of his work was driven by the experiences of his parents, and the uniquely Australian notion of potential, opportunity and reward for those willing to ‘have a go’.

“Like so many new Australians, my parents were drawn here by Australia’s promise – at once simple and spectacular – of opportunity, the idea that here you can go as far as your hard work will take you.

“Whether working with local schoolkids, or within the UN System, or through challenging world economic leaders in Davos, I’ve been privileged to be able to work to expand that promise of opportunity, so that it is available for everyone,” Alan said.

And as impressive as Alan’s achievements since completing his law degree have been, he remains focused on the reasons which drew him into studying and working in law, and encourages current students to do the same.

“In thinking about life after law school, don’t forget why you started studying in the first place.

“Everyone has an opinion, but ultimately the choices – and the consequences – are yours. So recover those early unadulterated ambitions, because they're the ones truly worthy of guiding your work.

“I am really humbled by this award, but it’s also a huge encouragement for me to keep going with my advocacy work,” Alan said.

While studying law, Alan worked as Chair of the National Youth Council, where he led a successful campaign to re-establish a federal Minister for Youth and secured $2 million in new funding to ensure young Australians had a seat at the table when national policy agendas were being discussed.

In addition to his role as Special Envoy for Young People to the UN Environment Programme Executive Director, he helped develop the agency’s youth engagement strategy, Alan has served on the Australian National Commission for UNESCO and worked as a human rights Advisor with the Australian Permanent Mission to the UN.

As a youth representative, Alan attended the World Economic Forum in 2015, and was asked to grow the Forum’s Global Shapers Community to support young change-makers across the world.

Alan completed his GDLP at ANU Law in 2012 and currently works as public sector lawyer in Canberra. He remains an active member of the University community, undertaking his Master of Laws, and the assisting with the ANU Alumni Mentoring Program.

- BY LYN LARKIN AND TIM GRAINGER