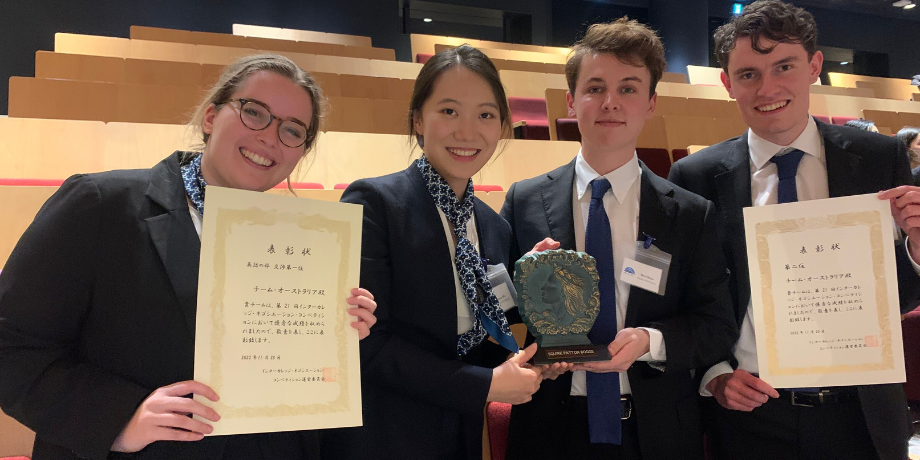 Isabella Keith (far left) with her Team Australia teammates from the University of Sydney and Monash University.

Little else as a law student can develop one’s knowledge, skills, confidence (and humility!) so quickly as mooting.

Isabella Keith, a Bachelor of Laws (Hons) / Politics, Philosophy and Economics student at The Australian National University (ANU) College of Law, has excelled as part of the national Australian team at the 21st Intercollegiate Negotiation Competition (INC) in Tokyo last month, alongside teammates from the University of Sydney and Monash University.

The competition saw universities from across Japan and select international teams from the Asia-Pacific compete in simulated arbitration proceedings and commercial negotiations over a two-day period.

Team Australia excelled in both the negotiation and arbitration rounds, placing second overall and top in the English-language negotiation division, just one point behind the overall winners.

Isabella was initially drawn to the competition because of her interest in international law and mooting competitions.

“I have a strong interest in international law – both public and private, so I was keen to learn more about the substantive law in this field and the role of alternative dispute resolution in international commercial disputes,” Isabella said.

“I have also enjoyed Australian mooting competitions in the past and was really excited about the prospect of competing in an international competition with law students from all over the Asia-Pacific region.”

A major highlight of the competition for Isabella was being able to travel to Tokyo to compete in-person at Sophia University.

“The initial expectation was that we would not be able to enter Japan as its border had not yet opened during the application process,” Isabella said.

“However, the Japanese Government announced, while we were mid-preparation in September, that they would be opening the border, which was very exciting, and our team was very keen to travel to Japan!

“I am very grateful to our coach, James, as well as the ANU College of Law for being supportive of this – it could not have happened without them.”

In his role as coach, James Fisher, a lecturer at the ANU College of Law, worked closely with Team Australia in preparing for the competition.

“The team collaborated remotely from their respective institutions for three months, with weekly group check-ins for agenda-setting and strategy discussion,” he said.

“After completing most of the problem analysis, legal research and submissions drafting in this way, the team came together for two weekend intensives in Sydney, followed by four days of on-the-ground oral presentation practice in Tokyo.”

“The latter stages involved gruelling arbitration and negotiation practices with me, colleagues at the University of Sydney, and many Team Australia alumni, including those now in professional legal practice in Japan.”

James praised his team for their effort and spectacular performance.

“The team did fantastically and really proved the high quality of emerging jurists at the ANU and Australia’s other leading law schools,” he said. “It was a pleasure and privilege as their coach to watch their skills develop to this very high level.”

“They deserve to be very proud of their proven abilities as researchers, strategists, negotiators and advocates, and also of the two handsome contributions now sitting in the ANU College of Law trophy cabinet!”

James, also the College’s Director of Moots and Competitions, believes mooting is a great way for law students to assess their understanding of substantive law, and the principles of sound and convincing legal reasoning.

“Mooting quickly develops the skills necessary to flourish in any aspect of legal practice or study: mooters confront complex hypotheticals in specialised or unsettled areas of law, learn to present sophisticated arguments in written and oral form, and must constantly reassess and defend their views in response to unforeseen critique from opponents and judges,” he explained.

“Little else as a law student can develop one’s knowledge, skills, confidence (and humility!) so quickly as mooting.”

This was certainly the case for Isabella, who learned a number of real-world legal skills during the course of the competition.

“A big focus of the competition was working cross-culturally, and developing these skills was extremely valuable,” Isabella said.

“The emphasis on clear, simple English, as well as making sure to speak so that you could be heard through a mask (as Japanese COVID-19 rules still require mask-wearing indoors, including when presenting or speaking), was really important.”

Isabella encourages other law students at ANU to consider getting involved in mooting competitions.

“Mooting might sound a bit scary at first, but it is one of the best things that I have done during my law degree,” she said. “It’s a great way to think about the law in a different way, and to apply what you’ve learnt in the classroom (or Zoom window) in a practical way.”

“Often, moot questions engage with topical and emerging legal issues, so it's very exciting to really be working right on the precipice of new areas of law. It’s also an opportunity to meet new people, and to have your own ideas challenged.”

Isabella said getting to meet the judges and fellow competitors in Tokyo “really added to the experience.”

“We were also lucky enough to meet some Team Australia alumni who were now working at international law firms in Tokyo, including Linklaters and Herbert Smith Freehills,” she said.

“It was really wonderful to be able to see how competing in the INC might translate to a future career working as a foreign lawyer in Japan.”