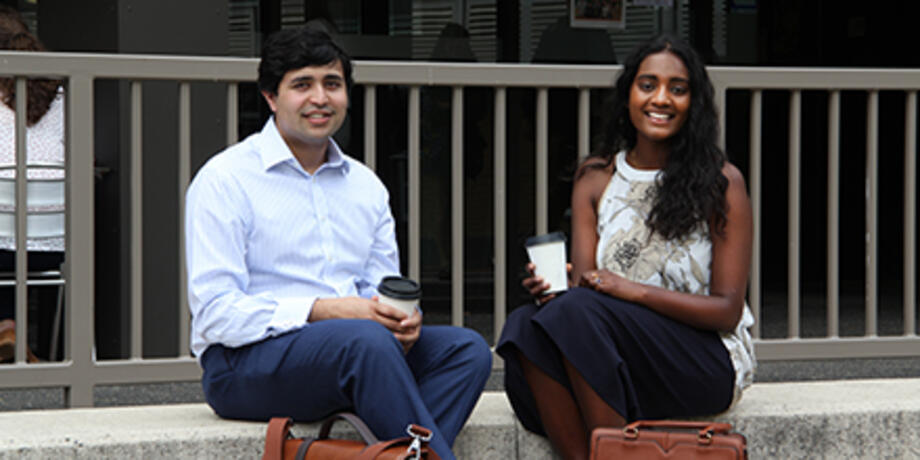 ANU Law students Sonali Fernando and Prashant Kelshiker have returned from three months in London where they undertook the inaugural London internships.

Sonali and Prashant received scholarships valued at £8000 to fund flights, accommodation and cost of living while they undertook 12-week supervised internships at Latham & Watkins LLP and Cornerstone Barristers respectively.

Both students found the opportunity fulfilling and broad ranging, and both reported that their hosts provided opportunities to learn on the job rather than watching others at work.

Sonali, who works part-time in a Canberra chambers, worked mostly on private equity transactions but found the tasks varied as they came along.

“It was an amazing opportunity and everyone there was so welcoming and accommodating, and so happy to teach me the ropes,” she said.

“They tried to give me the best of everything they were working on at the time, and they would take the time to sit down and explain things or guide me. They definitely invest in you which I really appreciated.”

“One of the things I was involved in was a foundation called 28 Too Many which is trying to eliminate female genital mutilation (FGM) in 28 African countries,” she said.

“And I worked on a matter for FINCA which provides microfinance for people in disadvantaged countries.”

While many barristers in the Chambers specialise in public law, Mr Coppel’s broad practise provided Prashant with a range of learning opportunities.

“One thing I really appreciated was the ability to work across a diverse range of cases. Philip was actively concerned to ensure I received exposure to work that was interesting and educational,” he said.

“The litigation you are exposed to is larger than anything you would anticipate straight out of law school.”

One of the exciting challenges both Sonali and Prashant experienced was learning to practise common law in conjunction with European Law.

“It took me a while to learn how to think about Europe and consider European Law,” Prashant said.

“And the two common laws – of Australia and the United Kingdom – have diverged quite a bit in the last 30 years.”

Both Prashant and Sonali thanked the scholarship donors and the London committee for organising the opportunity.

“It was an incredible experience and I’m really grateful to the donors for making it available,” Prashant said.

“It affirmed my plans to work in the profession and I definitely think I’m in a better place to apply for clerkships now,” Sonali added.

“Everyone was so friendly and supportive and I’m really thankful for everything I have learned by working there.”