Home » From Singapore to Australia

From Singapore to Australia 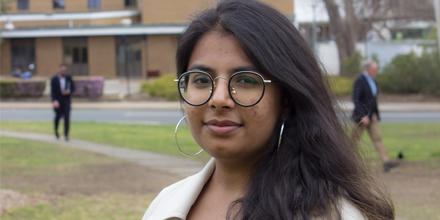 Law is not a cake walk for anyone, but it has been a very rewarding experience overall, Anjali says.

We have some of the most amazing international academic scholars, some ex-intelligence officers, and learning from them first hand has been a big privilege

Anjali Goyal a Bachelor of Laws (Honours) student was born in India and raised in Singapore by a family of doctors and engineers. Early on she realised that she didn’t want to follow in her parents’ footsteps, but a trip to Paris while she was still in high school actually cemented her decision of becoming a lawyer.

“During a trip to Paris, I witnessed court proceedings and was fascinated by how lawyers could be so convincing. The art of persuasion and how law can make a difference to the lives of people in a positive and potentially negative way intrigued me” Anjali says.

With her heart set on studying law, for Anjali the rest was simple.

“I like Australia- in Australia people have a great work ethic and it is laid back at the same time-so the balance of professional and personal life is great here.

“I also was sure that I wanted to pursue a single law degree and ANU is one of the only top few universities that offers that course so that is why I decided to come to ANU”, Anjali explained.

“I have been living at the Ursula Hall residence, and apart from my studies, I have been involved in many activities such as lindy hop swing dancing and fencing and have discovered some of my callings.

“I have met many people –many from all over the world and made many friends along the way. The overall experience has been great,” Anjali added.

“For me the biggest challenge wasn’t moving countries or staying by myself, it was studying law and actually excelling in it,” Anjali explained.

Anjali said that for her, using the services available including peer-learning sessions, contacting academics during consultation hours, reflecting on her own performance and learning from her peers were the keys to overcoming the challenges she faced.

“But I think coming to uni is that bridging gap between a teenager and young adult phase, where you do so many things for the first time - so don’t be afraid to learn and pursue new things.

“That is one thing that has changed my perspective towards life – and I have tried to employ that in my legal studies and my professional career as well,” Anjali advised.

Four years down the line, Anjali has almost completed her degree, which she aspires to receive during the graduation ceremony in July 2019.

“Personally I have discovered my capacity to work hard –much more than I thought I could. Law in general is not a cakewalk for anyone, but it has been a very rewarding experience overall.

“We have some of the most amazing international academic scholars, some ex-intelligence officers, and learning from them first hand has been a big privilege”, Anjali says as she reflects on what she has learnt throughout the course of her degree in the past years.

Since June 2017, Anjali has been working part time as a paralegal. After completing her studies, she wants to continue living in Australia with her long-term career goals being to practice law and specialising in international criminal law.