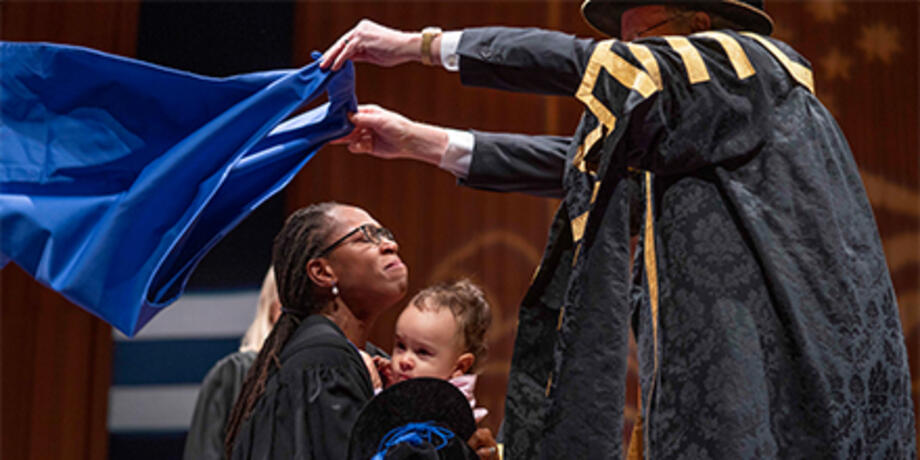 Now, I strive to be a quanta of hope to many, especially war-affected girls and women.

There were many incredible stories from last week's graduation ceremonies at The Australian National University (ANU). But perhaps the most remarkable was the journey of Veronica Fynn Bruey (PhD '19).

Veronica survived civil war in Liberia, after which she fled to Ghana as a refugee. On 19 July, the ANU College of Law scholar graduated with a PhD in Indigenous Studies.

"I thought I would never be a scholar," she says. "I could not write academically."

In a moving moment at the ceremony, she received her degree from ANU Chancellor Professor the Hon Gareth Evans AC, QC as he cradled her one-year-old son.

"It's been a long journey and that's why I was quite emotional receiving my doctorate," says Veronica.

"It's been extremely challenging. I've finally reached a place where I feel confident about following my passion.

"I lived in Ghana as a refugee for nine years and never imagined my life would reach this point."

When asked why she carried her son onto the stage, Veronica said she can't separate her success from her son's future, or her role as a mother from being a scholar and advocate.

She takes her son everywhere - conferences and other academic events - because, "there needs to be a change in perception about women and mothers and academia".

Examining systematic violence against Indigenous women, her PhD was a chance to face the demons of civil war and abuse she suffered as a child.

“My PhD focused on systematic violence against Indigenous women and the rule of law. I looked at both Australia and Liberia," she said.

"Although it wasn’t a comparative work of research, I examined parallels in both countries and how law was used to inflict colonial violence.”

Her doctoral studies were also a chance to celebrate the power of education to profoundly change people's lives.

When she needed education Ghana gave her the first opportunities, Veronica says.

"Now, I strive to be a quanta of hope to many, especially war-affected girls and women."

Veronica intends to return to Ghana where she hopes to help others in need.

"Last year I was appointed as a lecturer at the University of Cape Coast in Ghana, which is a chance for me to give back to the community the education - from secondary school to my undergraduate studies - that was invested in me."