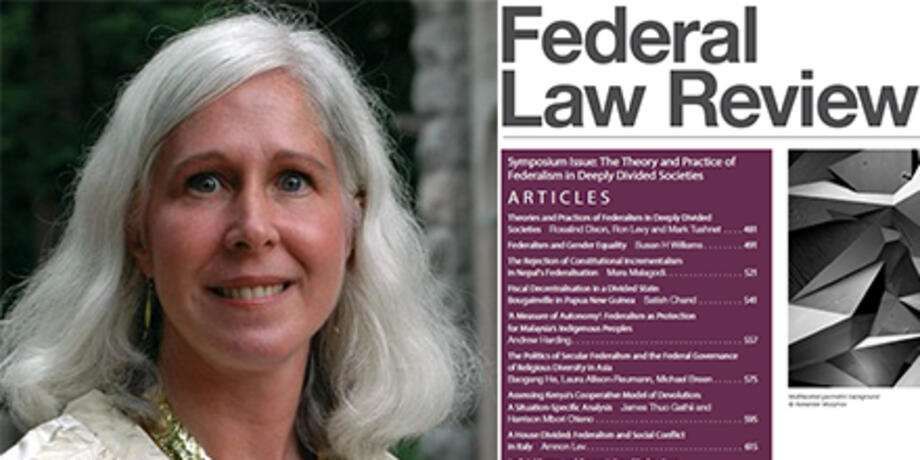 Professor Susan H Williams was lauded for her "exciting exploration of the complex relationship” between federalism and gender equality in Myanmar's constitutional design.

It is particularly meaningful for me to receive this award as an American, because it represents a welcome into the Australian community of legal scholars.

An essay exploring the intersection of federalism and gender equality in constitutional design has won the prestigious 2019 Zines Prize for Excellence in Legal Research, awarded by the Federal Law Review (FLR), a flagship journal of The Australian National University (ANU) College of Law.

The independent panel of judges for the Zines Prize said Professor Williams’s contribution was “deeply researched across multiple domains”, providing an “exciting exploration of the complex relationship” between federalism and gender equality in Myanmar, where “diverse actors and ideas are competing to shape the future”.

“It is an honour to receive the award, particularly when the other nominated articles were so outstanding,” said Professor Williams.

“It is particularly meaningful for me to receive this award as an American, because it represents a welcome into the Australian community of legal scholars.”

Professor Williams described the process of researching connections between federalism and gender as “fascinating and challenging”.

“In my scholarship, I have found that the most powerful ideas and insights often arise in the spaces between different frameworks – whether those frameworks are disciplines or schools of thought or areas of legal doctrine,” she said.

As director of the Center for Constitutional Democracy at the Maurer School of Law, Professor Williams has a longstanding interest in Myanmar. She has advised organisations on ensuring women’s perspectives, especially those from ethnic minority groups, are heard and considered in the country’s peace process.

“Federalism is at the heart of the peace negotiations in Myanmar and so the question of how federalism, or what kind of federalism, might promote gender equality arose naturally from my advising work,” she said.

Professor Williams is currently researching a range of issues relating to gender equality in constitutional design, from electoral gender quotas to the challenges posed for gender equality by official recognition for customary or religious systems of law.

Valued at $500, the Zines Prize for Excellence in Legal Research was established in 2010 in honour of the late Emeritus Professor Leslie Zines AO, a former dean of the ANU College of Law and one of Australia’s most outstanding legal scholars.