Portrait of environmental expert selected as finalist in Archibald Prize 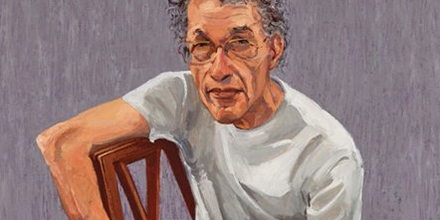 A portrait of ANU Professor Tim Bonyhady has been chosen as one of 47 finalists for the 2015 Archibald Prize.

“It’s a painting with power and presence, a great likeness, and also has very interesting resonances with Gustav Klimt’s painting of my great-grandmother, Hermine Gallia, now in the National Gallery in London.”

The entry is the product of a 30-year friendship between artist and subject, with Sayer at first not revealing his plan to enter it into the Archibald Prize.

“Late last year he said he’d like to paint my portrait, and I said ‘fine, why not’. It wasn’t until much later that he revealed he wanted to put it in the Archibald,” Professor Bonyhady said.

Professor Bonyhady is one of Australia's foremost environmental lawyers and cultural historians, and is Director of the ANU Centre for Environmental Law and the Centre for Climate Law and Policy.

Andrew Sayers said the painting had been a long time coming.

“When I first met Tim in the mid-1980s I did some drawings of him because I was fascinated with the way his body moved when he was in animated conversation,” Mr Sayers said.

“I’ve always wanted to paint Tim, so in a sense I’ve been thinking about this portrait for 30 years.”

He expressed his delight in having his work chosen as a finalist ahead of more than 800 entries.

“You always go into competitions knowing that there’s an element of the unknown, you don’t quite ever know what the judges are looking for,” Mr Sayers said.

Professor Bonyhady is renowned for works such as Good Living Street: the Fortunes of my Viennese Family, a book which won NSW Premiers’ Prizes for Literature and History. The book tells the story of his mother’s family, who were patrons of the arts in Vienna and fled to Australia following the Nazis’ annexation of Austria with their Klimt portrait.

The Archibald Prize winner will be announced on 17 July.