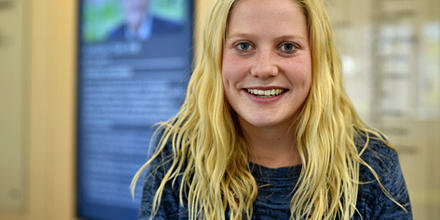 For a student who hadn’t planned to come to ANU - or indeed study law - Tess Kelly will graduate with her Bachelor of Laws with Honours tomorrow, leaving The Australian National University a significant legacy in Indigenous reconciliation.

Announced as the Undergraduate Student of the Year for 2014, Tess has made significant efforts during her time at ANU to improve Indigenous reconciliation and increase tolerance of homosexuality and gender diversity in her residential college, John XXIII.

Among Tess’s achievements has been the introduction of an Indigenous reconciliation project between ANU and the Mutitijulu Aboriginal community near Uluru in the Northern Territory, which sees students from John XXIII College travel to Mutitijulu and working in the community’s arts centre, day care centre and the school.

In addition, the project funds artists from the Mutitijulu Maruku Arts Centre to travel to Canberra and exhibit their work at the ANU School of Art – with over $40,000 of work sold in the first year.

“After I left John XXIII College, I wanted to ensure the continuation of the project, and that’s what happened - with three more trips organised and two artists coming to the ANU from Mutitijulu in 2016,” Tess said.

Tess said her passion for Indigenous issues was heightened through her participation in the Aurora Internship program – where she worked with the Top End Legal Women’s Service – and the ANU College of Law’s Indigenous clinical legal program, where she spent one day a week with the Aboriginal Legal Service in Canberra.

“I also studied Human Rights Law in Australia with Professor Simon Rice in the ANU College of Law where we did a project about the Northern Territory intervention.

“That course definitely shaped the direction of my studies, and I went on to write my honours thesis about Indigenous mandatory alcohol treatment in the Northern Territory.”

Initially focused on taking a gap year after Year 12, and then studying medical science in Queensland, Law at ANU had never been a first preference for Tess, but her plans changed after her father passed away in 2010 and her brother suggested she join him at ANU so they didn’t have to be alone at such a difficult time.

“Law had always been in the back of my mind that was something I might study – and Dad always said I would love law.

“So I applied for a double degree in Science and Law at ANU, thinking if I didn’t like Law I could swap over to Medicine. However, when I got to Canberra, and looked at the course guide, there were so many Arts courses I wanted to do, I ended up swapping Science for Arts, and haven’t looked back.

“I loved Arts-Law from the start. It wasn’t planned but it has been one of the most amazing opportunities, and I’m so glad that something so positive came out of such a negative time,” she said.

Tess is heading back to the Northern Territory in 2017 to work as a Judge’s Associate with Justice Hiley in the NT Supreme Court before commencing with international law firm, Allens, in Sydney in 2018.