Home » Outside my comfort zone: How administrative law taught me to embrace opportunities

Outside my comfort zone: How administrative law taught me to embrace opportunities

I wasn't just going through the motions of admin law; I found myself wanting to go further, and that sealed my decision to take Advanced Administrative Law.

One of the most important lessons Jeremy (Wei Peng) Soh has learnt during his studies at The Australian National University (ANU) has been to always embrace new opportunities.

It’s a lesson that began with Administrative Law (LAWS2201), a compulsory course for law students at the University that can be intimidating on account of its broad scope, voluminous readings and complex case studies.

“When I started at ANU, admin law was one of those really scary subjects. I had serious trepidation,” admits Jeremy, who has just completed the fourth year of his Bachelor of Arts/Laws (Hons) flexible double-degree.

“It definitely has a reputation for being one of those harder courses, but I was really lucky to have (Associate Professor) Greg Weeks as a lecturer. I enjoyed it so much, I thought, ‘You know what? I’ll do it [Advanced Administrative Law (LAWS4262)] as an elective, too.

“I absolutely enjoyed it because the content was so interesting. It’s challenging, but at ANU you have these incredible academics and contacts, especially in Canberra, who make studying it (administrative law) so worthwhile and enjoyable,” he adds.

Over the 2018-19 summer break, Jeremy undertook an internship at the Office of the Commonwealth Ombudsman. There, he worked in the legal team processing freedom of information requests and carrying out legal research.

However, the highlight of his experience turned out to be an essay he wrote for his Law Internship (LAWS4230) course. At the recommendation of convenor Associate Professor Jolyon Ford, Jeremy adapted it to a research article that was submitted – and recently published – in the Australian Journal of Administrative Law.

The idea for his paper, titled “Creating a Framework for Evaluating the ‘Effectiveness’ of the Commonwealth Ombudsman”, arose when he was preparing his literature review.

“I was reading articles (for the internship paper), and there was sort of unanimous praise for the Ombudsman. It makes sense; it seems to be effective. But then I realised no one had ever tried to ‘evidence’ these claims with objective, measured metrics,” says Jeremy, a Criminology major.

“I thought I could fill that gap through my paper, which I wanted to be useful for the Ombudsman Office. My supervisor thought it was a very ambitious task, but she was very supportive.”

Commonwealth Ombudsman - about us - English subtitles

The Office of the Commonwealth Ombudsman aims to protect the community in its dealings with the Australian Government. Established in 1977, it investigates complaints from people who believe they have been treated unfairly or unreasonably by an Australian Government agency.

Creating a framework to evaluate its effectiveness required “creativity and pragmatism”, says Jeremy. Additionally, he applied critical thinking and problem solving skills honed by his work as a corporate consultant over the past four years.

A few weeks after submitting the paper, his moment of truth arrived during an Income Tax (LAWS4221) lecture.

“When I received an email (from journal editor Professor Matthew Groves) saying my article had been approved for publishing, it was surreal. I was just lost for words.

“Not many undergraduate students have the chance to be published in a research journal, and to have the first submission accepted without revision was even more amazing. Mostly, I’m just pleased to produce something with real-world value – it’s a really nice feeling,” he says.

Jeremy was always determined to take his own path rather than following his older brothers, both of whom undertook their university studies in Melbourne.

Moving interstate is a big transition for any student, but Jeremy knew Canberra was right for him as soon as he arrived.

“I came to ANU and really loved the environment and academics here. I thought that not many people get this opportunity, so I was going to take it,” he says.

“A major reason I came to ANU was because of the academics, and Greg’s passion and enthusiasm for teaching was immediately infectious. I wasn’t just going through the motions of admin law; I found myself wanting to go further, and that sealed my decision to take Advanced Administrative Law.” 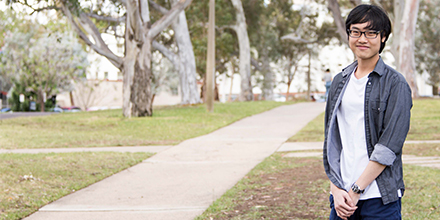 Following his internship at the Office of the Commonwealth Ombudsman, Jeremy has his sights on other exciting opportunities including an internship at KPMG and a clerkship at the Melbourne office of global law firm Ashurst.

From taking on unexpected electives to tossing his hat into different rings, like the EY Tax Consulting Challenge, Jeremy’s philosophy is to always step up when opportunity knocks.

“Over the past four years, I’ve had different experiences in law and corporate consulting. I genuinely enjoy many areas of law, including administrative law, so I think a non-linear career is really exciting,” he says.

“That’s the beauty of our generation – there are so many opportunities.

“My recommendation is to just give it a go and give it your best. You have nothing to lose. When I went into Administrative Law as a compulsory course, I never thought I would enjoy it or decide to take an elective. When I did Advanced Administrative Law, I never thought I would do so well or it would lead to my experience at the Commonwealth Ombudsman.

“And when I did my internship, I never thought it would lead to being published in a peer-reviewed journal.

“I guess the moral of the story is to keep an open mind and never close yourself off from any opportunity,” he offers with a smile.