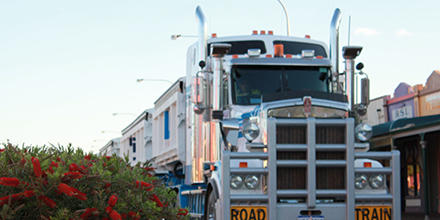 Trucks and truckies get a bad rap, especially from other road users.

This is understandable. An accident involving a massive projectile like a truck can cause unspeakable carnage.

Indeed, it was one of these accidents, an horrific truck and bus crash near Grafton in 1989, that galvanized the industry into action.

The Australian Trucking Association (ATA) was formed, and one of its major initiatives was TruckSafe.

It has been in operation since 1996, and its members take pride in their commitment to road safety. Members are accredited after a rigorous audit and review process.

Regulation and enforcement are absolutely essential for achieving road safety.

But regulation will never be enough by itself, even with more and more resources thrown at enforcement.

The most powerful tool for changing behavior is somehow getting people to do things because they want to, not because they have to.

TruckSafe harnesses this self-motivation, as a potent add-on to the necessary framework of laws and regulations.

Any self-regulatory scheme, to have credibility and integrity, must operate independently from the business interests that drive the association and its members.

First, it has independent auditors who assess in the first instance whether applicants for initial or ongoing accreditation have achieved compliance with the standards.

Secondly, it has an arms-length oversight body, the TruckSafe Industry Accreditation Council (TIAC), which comprises experienced industry and community representatives.

TIAC can accept or reject audits, as well as suspend or terminate operators who no longer comply.

Now, this is where things become a bit more complicated. TruckSafe is not the only scheme of this kind.

In many ways, this is undoubtedly a good thing — but there is a problem.

Combining the functions of regulator and accreditor, when there are other accreditors in the field, potentially creates a conflict of interest.

Moreover, if the regulator extends regulatory benefits (exemptions for example) to the members of its own scheme and not to the competitors, there is no level playing field, Operators will naturally gravitate to the government scheme.

If the standards in the competitor schemes are in fact higher and more rigorous than those in the government scheme, there is then a net safety loss.

So the Australian Trucking Association argued in a recent submission to the government’s Competitive Neutrality Review.

The ATA argued forcefully that TruckSafe’s maintenance standards are more extensive than those of the NHVAS; that particular care is put into the selection of independent auditors; and, crucially, that TruckSafe enjoys the independent oversight of TIAC.

Yet TruckSafe has to operate in an anticompetitive environment.

What is the solution?

An outside observer might be drawn to the idea that the functions of regulation and accreditation should be separated. But the ATA did not need to go this far.

It would be enough, so the ATA argued, simply to extend the regulatory benefits to TruckSafe members and allow TruckSafe to operate as an alternative to the NHVAS — on a level playing field.

Having chaired TruckSafe accreditation council since it was established, I have seen it develop into a robust and bona fide scheme with credibility and integrity.

Yet the membership numbers are small, because TruckSafe cannot match the government-provided incentives to join the NHVAS. This is regrettable.

Initiatives like TruckSafe should be nurtured, not held back.

In a nutshell, allowing TruckSafe to operate on a level playing field with the NHVAS is a simple, effective and compelling way of enhancing road safety — the common goal of all of us.

Emeritus Professor Michael Coper has chaired the TruckSafe Industry Accreditation Council since 1996. He was a member of the Inter-State Commission from 1988-1990 and later advised on the establishment of the National Road Transport Commission and the National Rail Corporation.

This article was first published in Australian Transpost News on 3 August 2017.Check out the full feature in the August edition of ATN. Subscribe here.