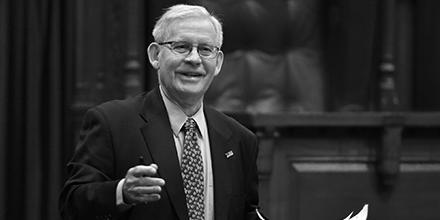 Michael was the very model of a Law School Dean; an indefatigable presence who cared enormously for staff and students and for the Rule of Law.

Emeritus Professor Michael Coper AO, FAAL, an eminent scholar of constitutional law and the ANU College of Law’s longest-serving Dean, passed away on 13 April 2019 in Canberra.

Born in 1946, Professor Coper graduated with a Bachelor of Arts/Laws in 1970. Following a year at the University of Rajasthan in Jaipur, India, he returned to Australia in 1971 to be one of the founding members of the University of New South Wales (UNSW) Law School, where he completed a PhD on section 92 of the Australian Constitution (Interstate Trade).

Professor Coper moved to Canberra in 1988 upon his appointment as Commissioner of the Inter-State Commission. In the same year, he appeared as counsel in the high-profile Cole v Whitfield case that tested interstate trade and commerce power of the constitution. The landmark decision was Professor Coper’s “yin and his yang”, according to the Honourable Justice Stephen Gageler.

As Commissioner, he produced reports on reform of the Australian waterfront and of interstate land transport. His contribution to transport safety, most notably his assistance in the running of an industry self-regulation scheme for truck operators, was recognised when he was awarded the Order of Australia in 2018. His distinguished services to the law and legal education were further recognised by UNSW when he was awarded an honorary doctorate in March 2019.

Professor Coper joined Sly & Weigall (later Deacons Graham & James) in 1991 as Director of Government Advising and worked in full-time private legal practice until 1995, when he was appointed as Professor of Constitutional Law at the ANU following the retirement of the late Emeritus Professor Leslie Zines AO.

Appointed Dean of the ANU College of Law in 1998, Professor Coper served in that position, and as Robert Garran Professor of Law, until the end of 2012. He was appointed as Professor Emeritus of the ANU in 2017.

Professor Coper’s Deanship was characterised by significant growth in the College's educational and outreach programs, in its scholarly output, in its community engagement, and in its human and financial resources.

“Michael was the very model of a Law School Dean; an indefatigable presence who cared enormously for staff and students and for the Rule of Law,” Professor Wheeler said.

Professor Coper was also Chair of the Council of Australian Law Deans (2005-2007), Vice President of the International Association of Law Schools (2011-2014), and was a member of the American Law Institute and a Foundation Fellow of the Australian Academy of Law.

Emerita Professor Fiona Wheeler FAAL, a constitutional law expert and former Deputy Dean of ANU College of Law (2010-2014), said Professor Coper had fostered her interest in the art of judging and the judicial process through his “great insight” and “compelling fascination” in the field.

“Michael brought out the best in people – inspiring, exciting and enthusing those around him,” she said.

His longstanding scholarship on s 92 motivated him to maintain his over 30-year association with the Australian road freight industry in various capacities. His expertise also inspired a collection of essays published in 2018 and edited by ANU College of Law constitutional law expert, Professor James Stellios FAAL.

Professor Coper held visiting positions in the United States, and in 1999 was elected as a member of the American Law Institute (ALI). He was Chair of the Council of Australian Law Deans (CALD) from 2005-2007 and has been Vice President of the International Association of Law Schools (IALS) since 2011.

He is survived by his wife and fellow ANU College of Law academic, Associate Professor Judith Jones, and his five children. ANU will host a memorial service for Professor Coper at University House on 7 May at 1pm.