Home » Standing up for social justice

Standing up for social justice 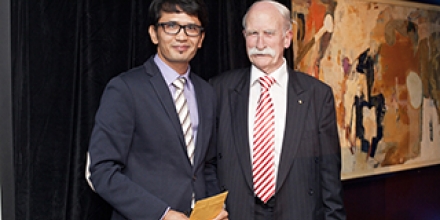 Law graduate BESMELLAH REZAEE argues his case for an Australian bill of rights.

The history of mankind is entwined with an ongoing struggle between the right and the wrong, the just and the unjust, and the compassionate and the cruel.

Unfortunately, for the most part, cruelty and injustice have had the upper hand especially from the region of the world I come from.

My family fled hundreds of years of injustice and cruelty in Afghanistan when I was a child because of their Hazara ethnicity and Shia faith.

From the very day when I defined my identity and my place in the world as a teenager, I committed myself to right the wrong and to fight for justice in the face of all the hurdles that the history of mankind has witnessed.

My story begins there. My story is the story of millions of other passionate and dedicated fighters for the sake of a better world, a peaceful world and a just world where we can respect and accept each member of the human family as equals in dignity and privilege.

My legal career started on that premise and today I am more committed to the cause of social justice than ever before.

Standing up for justice is an integral part of my life. I believe in the positives and the power of humanity and that we will one day witness a world where justice and compassion will triumph over injustice and cruelty.

Australia is a privileged nation. We have so many positives and values that we can celebrate and showcase to the world. Nevertheless, there are also endeavours to be made.

Indigenous Australians are not fully afforded their human rights and our constitution doesn't recognise them as the owners of this country.

We have no constitutionally entrenched bill of rights in our country, representing a serious threat to human rights and social justice.

In democratic governance around the world some comprehensive form of legal protection for basic rights is seen as an essential check and balance. However, Australia is now the only democratic nation in the world without a national bill of rights.

To worsen the situation the Federal government is currently moving to repeal section 18c of the Racial Discrimination Act.

This Act is a fundamental piece of law that empowers and affords minorities their human rights. That is, to be able to defend their right, with the force of law.

In the words of Professor Simon Rice, Director of Law Reform and Social Justice at ANU, "This would be the closest we've come to unconstrained racist speech in 20 years - since before the current law was enacted."

Unlike acts, a constitutionally entrenched bill of rights could not be taken away by the executive or legislative arms of government.

A bill of rights would guarantee every Australian's basic and fundamental human rights.

It is time that we honour and protect the less privileged, promote social justice and cohesion, strive for the recognition of the Indigenous Australians in our constitution and fight for the inclusion of a bill of rights entrenched in the supreme document of our great country.

Besmellah Rezaee is a practising solicitor and was recently awarded the John Gibson AM Award for the Young Australian Migration Lawyer of the Year 2014.