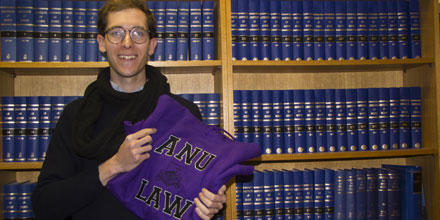 I've heard that lawyers in the Integrity Vice Presidency represent more than 70 legal systems, so I'm excited to learn first-hand the differences and similarities across jurisdictional borders.

An ANU student interested in comparing anti-corruption measures amid the upheaval of seven decades of US supremacy in the Asia Pacific region will assess them in person during his internship with the World Bank Group in Washington DC this year.

“I think it'll be a great insight into the diversity of legal practice and international professional pathways, and a really enriching opportunity to learn on a person-to-person level about anti-corruption, comparative law, how international organisations work, and the practice of international law and global governance,” he says.

“I'm really hoping to pursue to a career in transnational legal practice and legal academia, so I think the scholarship will be a rare opportunity to bridge both my professional and academic interests.”

He had three motions for applying. First, keenness in anti-corruption efforts in the development sector, especially the Asia-Pacific, where China's Belt and Road Initiative and its Asian Infrastructure and Investment Bank seem set to shake up the traditional 'Washington Consensus' and Bretton Woods institutions.

“I'm very interested in observing how China's entry into the international infrastructure and development space is being perceived by the US and World Bank, and how to ensure best practice and a standardised anti-corruption regime across these new and old institutions,” Nicholas says.

“Second, throughout my degree I've focused on comparative law and socio-legal studies, looking especially at Japan and Taiwan, so I was keen to immerse myself in an international workplace with colleagues from diverse legal traditions and cultural backgrounds.

“I've heard that lawyers in the Integrity Vice Presidency represent more than 70 legal systems, so I'm excited to learn first-hand the differences and similarities across jurisdictional borders.

“Third, the opportunity to spend a semester living and working in Washington seemed like a dream come true. I've been an avid follower of a lot of think tanks in DC and New York – Brookings, CSIS, NYU's US-Asia Law Institute, and the Council on Foreign Relations – so I was excited by the prospect of attending seminars and connecting with academics and policymakers who I've followed closely over the years.”

He's also keen about “the prospect of eating my way around the US”.

Nicholas is enthusiastic to learn about the Bank's anti-corruption regime and how it identifies corruption and fraud.

“Drawing on my prior experience working on projects examining Chinese Foreign Direct Investment into Australia at the East Asia Bureau of Economic Research, I'm really looking forward to honing my forensic investigation skills to look beyond the corporate veil.

“I'm also really interested in the 'culture' element in anti-corruption investigations and what sets legitimate cultural traditions apart from corrupt practices and how that distinction is made by international organisations.

“Besides this, I'm also hoping to make the most of the internal seminars and other opportunities at the Bank to learn more about its Rule of Law and development work, especially in the Asia-Pacific.”

Nicholas says he can’t quite believe he has received the scholarship, nor that he’ll spend six months in Washington.

“I'm incredibly humbled to have been selected, and will doing my utmost to be a worthy ambassador for the ANU and ANU College of Law, so many more generations of ANU Law students can benefit from the same opportunity.

“This will also be my final law course after a very long undergraduate degree, so it is also slightly bittersweet knowing that I will not be returning to the place that has been such a defining part of the past seven years of my life.

“But I'm really excited to see more and more international opportunities popping up.

“I hope a growing body of ANU law students will be able to learn about law and legal practice, not just in international organisations like the World Bank, but also throughout the Asia-Pacific region.”