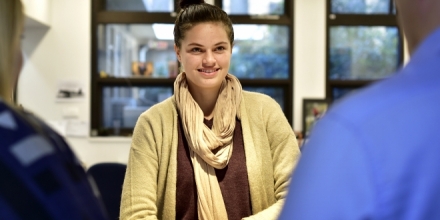 Marley Isua’s first job at the ANU came about through a fortunate misunderstanding.

She thought the interview organised by an employment agency with The Australian National University’s National Centre for Indigenous Studies was for a standard office job.

“Instead of a just a job, the Centre offered me a role as an administrative support officer and a paid traineeship, helping me gain a qualification in the process. It was a rather surprising offer, but a fabulous opportunity,” Marley said.

Nine months later, Marley has not only gained her Certificate of Business Administration in record time – she did six units in one month - but secured a new permanent job with the ANU College of Law.

In the role, Marley works as the front face of Student Administration, supporting the College’s 500-plus students with a diverse range of tasks, including enrolment, changing classes and understanding the University’s broader student systems.

It’s another unexpected stop on a journey of discovery for the young 19-year-old Indigenous woman from Woodbridge on the southern outskirts of Brisbane.

“It was hard leaving my family to find a job in Canberra - particularly my brothers and sisters because they are so young and we are all so close - but I wanted to set a good example and become a role model for them by moving on and finding a job.

“Where I come from, it’s easy for Indigenous kids to fall between the cracks of society’s expectations. I want my three brothers and my sister to have expectations for themselves,” Marley said.

Marley’s own role model is her great-grandmother Ruth Hegarty, a well-known Indigenous author and activist whose best known work, Is that you Ruthie?, chronicles her experience growing up on an Aboriginal mission in Queensland and won her the 1998 Queensland Premier’s Literary Award.

“My great-grandma is such an inspiration to me. She puts all the proceeds from the sale of her books into the organisation she founded - the Binambi Barambah Aboriginal Corporation - to run cultural enrichment camps in south-east Queensland for Indigenous and non-Indigenous kids in the school holidays.

“Some of my favourite memories are include going to the camps as a kid and learning about the culture and stories of other Aboriginal people. I still go now, but as a volunteer cultural advisor.”

It was also Ruth who also suggested Marley try modelling - which Marley does part-time - encouraging her to model for the Black, Bold and Beautiful International Women’s Day Luncheon when she was 15 years old.

“The luncheon is all about inspiring Indigenous women, showcasing Indigenous fashion and giving the girls who model self-belief and self-esteem. For me it was a great opportunity and it got me into runway modellingm,” Marley said.

Marley has both Aboriginal and Torres Strait Islander heritage. On her mother’s side, she’s connected to the Burri Gubba and Gungal people in the Bindal region near Townsville and Gungaloo near Emerald north-west of Brisbane. Her father’s people, the Saibai, are from the northern most Torres Strait Island, close to Papua New Guinea.

Now that she has her business qualification, Marley is setting her sights on further study. She is investigating a Bachelor of Arts at the ANU, majoring in social sciences.