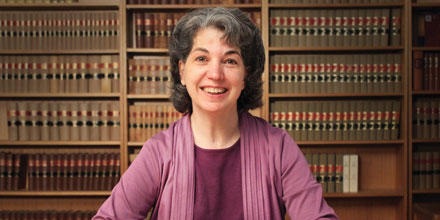 Associate Professor Molly Townes O’Brien says trying to understand the world after awakening from a coma was similar to what the creature in 'Frankenstein' experienced.

It was as if there was a barbarity in humanity, and the creature in Frankenstein really suffered from that as well.

Associate Professor Molly Townes O’Brien recalls her bicycle crash in 2012 that left her unconscious and in a coma for 68 days in the Canberra Hospital.

After regaining consciousness, the criminal law and justice specialist had post-traumatic amnesia for a further 56 days, with a tube up her nose, unable to move much or communicate with those around her.

“That reminds me when I read a little of Frankenstein, Frankenstein is trying to understand the world and he just doesn’t understand why these people are beating him up and throwing things at him,” Professor Townes O’Brien told ABC Radio Canberra.

“It was as if there was a barbarity in humanity, and the creature in Frankenstein really suffered from that as well.”

Professor Townes O’Brien was speaking as part of The Australian National University’s celebration of two centuries since the publication of Mary Shelley’s 1818 novel Frankenstein.

Experts have this week met at ANU for Frankenstein 2018: Two hundred years of monsters, speaking on how the book has influences fields including science, technology, genetics, artificial intelligence and medical ethics.

Professor Townes O’Brien will speak to the conference session “How dangerous is the acquirement of knowledge” and describe what happened as she awakened from her coma:

“I was unconscious with eyes closed for the first 12 days and then in a recovery state called Post-Traumatic Amnesia (PTA) for the following 56 days.

“During this period, I was unable to form reliable new memories. I appeared to be awake and I responded to speech. I spoke a little and smiled occasionally.

“After a few days of PTA, it was evident that my sense of humour was muted but intact. I had only tenuous ideas about where I was, who visited me, or what had been said.

“My parents visited me but I don’t remember it. I perseverated – repeating the words I heard being spoken. I wrote notes in a rehab book. My spelling was fine. I could spell superannuation and even diarrhoea. But weeks passed before I could remember new things from one day to the next.

“Months passed before I could make normal inferences, plan an outing, find specific items at Woolies for a rehab class, or reassume my responsibilities as a law academic.

“I will discuss the extent to which my awakening from a coma mirrors the subjective experience of Frankenstein’s monster becoming alive.

“We both gradually gained knowledge of the world, its dangers, and its pleasures.