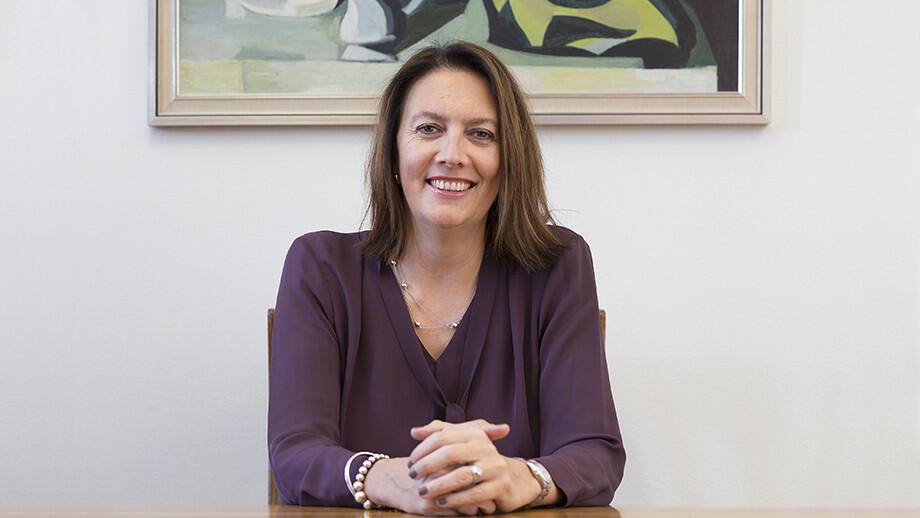 Naomi became Pro-Chancellor at the beginning of July 2017, having been a member of the University Council since July 2014.

Naomi grew up in Canberra and completed honours degrees in Economic History and Law at ANU. In 1994 she was a co-recipient of the Tillyard Prize.

Since graduating, Naomi has worked in a variety of roles including with refugees as well as in the banking and finance sector.

Congratulations on becoming Pro-Chancellor. Tell us what it means for you.

ANU has been so important to me - studying here was a transformative time in my life. It expanded my horizons, redefined what I thought excellence was, putting it on a global scale, rather than a more local one.

It built my interest in public affairs - this is where I became interested in the governance of our country, its civic institutions and the private sector as well.

I also have a strong familial connection to ANU - my father, mother and sister all have degrees from ANU, including a PhD and a couple of bachelor degrees - so my entire immediate family are graduates, which is part of why I feel such connection.

For these reasons, I jump at any opportunity to repay ANU for what it gave me.

What is your favourite part about being involved in the running of the University via the Council?

I really enjoy hearing about how the University is impacting our world, in so many ways.

As a Council, I like to think we contribute usefully to that impact - providing strategic support across each of the three areas of focus - teaching, research and societal transformation.

Those are some very impressive qualifications you have, having completed most of them here at ANU. What is it about the University that you love?

Physically, it's a beautiful place. I love the bush campus, but most importantly what I really love about this place is its excellence - as I just said, ANU sets itself and holds itself to aspirations, about being globally impactful.

Much of what I studied and researched here, in economics and law, was up there among the very best universities in the world. That constant commitment to excellence - really pushing and enabling everyone from students through to staff to be the very best that they can be, in a global context - that's what I love the most.

We have to ask, do you have a favourite space on campus? If so, where is it and why?

When I was a student here, Union Court was the heart of the University. I was involved in the Students' Association, so I spent an enormous amount of time there. It's where I learned activism and about how people can make a difference, so Union Court is special for me - just for that history.

When I'm on campus now I stay at University House. In the mornings, I often find myself down on Acton Peninsula - seeing kangaroos in the grasslands is also extremely special, particularly for someone who lives in inner-city Sydney.

Tell us a little about your time outside ANU after you graduated and what finally drew you back to us?

I graduated in 1995 with a Graduate Diploma in Legal Practice, and then spent some time working in universities and for the Union Nations High Commissioner for Refugees.

I went on to do a Master in Public Policy at Harvard, and ended up using my interest in public affairs working for Government clients in investment banking.

It surprises me that I've remained in banking at a global bank for 20 years!

What was it like working in the refugee camps?

Kenya and Nepal were very different places but the refugee camp experience is surprisingly similar. These are people who find themselves, often through completely no fault of their own - due to social upheaval or conflict - living outside their home countries, in the most basic of circumstances.

I found it quite confronting. With time, it becomes a bit more familiar but, for me, I never really felt easy with the refugee camp environment.

In a public policy sense, it highlighted for me that Australia has a good history of resettling refugees from those permanent camp environments. It brought home the very precious nature of each one of those resettlement spots and the importance of making sure they do find their way to the neediest of refugees.

In your new position, you've attended many graduations. How do you find that experience?

The ceremony and symbolism at a graduation is very strong - as the program says, elements of a graduation date to medieval times. I really felt that - the awe that the ceremony brings.

As Pro-Chancellor, for me, the most thrilling part of the ceremonies is shaking every graduate's hand - seeing up close just how satisfied and thrilled they all are, the look in their eyes, the pleasure and the gratitude. Connecting, even if just briefly, with each graduate was the most significant takeaway.

When I did my honours year in economic history, I read so much work by Professor Graeme Donald Snooks who was in the ANU Research School of Social Sciences. He was probably the single most important author that I read - and had the good fortune to meet - during my time at ANU.

Today, I don't have a favourite author so much as genres.

I read a lot of Australian political retrospectives and a heap of current affairs - from finance, economics to politics.

When it comes to fiction, I tend to gravitate to the big names ... great Australian authors like Tim Winton. Whenever Ian McEwan's books come out, I always buy them and read them.